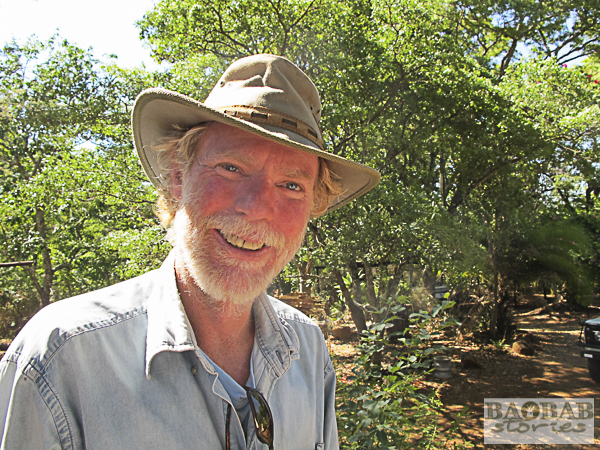 Wayne Stutchbury, artist from Zimbabwe, about baobabs: “I am a sculptor and I just love their shape. They are amazing. If you look at them the skin reflects the light. In the mornings colours seem richer compared to late afternoon. Baobabs are not just a normal tree – they reflect the blue and purple of the sky. For an artist, that is great.”

While doing research about baobabs in Zimbabwe I met Wayne Stutchbury in Harare together with my friend Rozanne Tunmer. The artist talked about his love for nature, baobabs, baobab art, and the Zimbabwean “bush” – where he grew up with his brother Ralph.

Right away Wayne revealed one of his top outdoor locations for painting baobabs in Zimbabwe – and it comes with a good piece of advice for me because he said: “Chitaki is definitely a place of pilgrimage for you!” The enchanting baobab spot is on the escarpment just above Mana Pools – the world famous wilderness, National Park and World Heritage Site in the North of Zimbabwe. 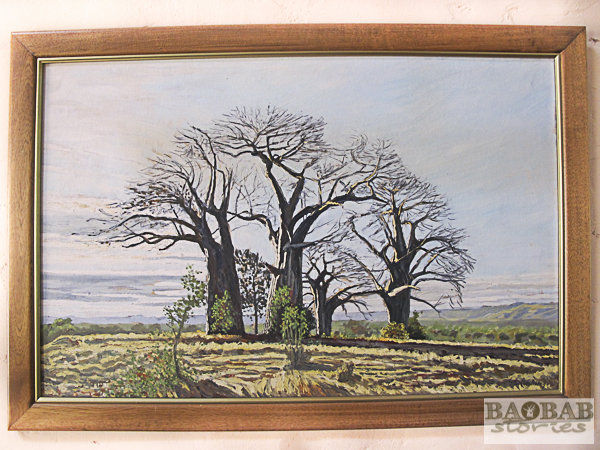 Drawn to a Magic Spot

According to him, the place with its ancient baobabs has a mystic aura. Humans were drawn to the area at least as far back as the 15th century because it was on a gold trail and therefore frequented by traders.

The spot is located uphill at some distance to the magic Zambezi River and with a constant wind blowing. It provides an excellent oversight of the area. “If you scratch around the baobabs you can find remnants of pots and flints” he says and continues “you know even as you arrive that if it was ever people here this is where they would stay.”

The African villages are long gone – the mud structures dissolved to soil and the wood used eaten by ants. But the baobabs are still there. “You can see around for miles and miles and you are immediately drawn there – these huge trees and how they relate to each other”.

The artist describes a baobab pair that has grown up together to form an enormous entity yet split in the middle by a gap he refers to as a “door”. With his view as an artist Wayne describes how the trees would correct their growth pattern and form a beautiful arch which in the end integrates them into one. A perfect natural sculpture to be seen and painted as one tree. “When you painted it a few times then you are so conscious – I spent a week looking at that thing. Shouting at it – laughs – getting cross.” 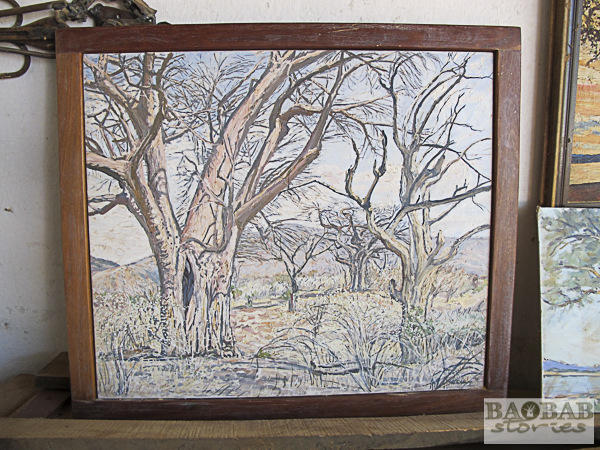 Some time ago he spent two weeks there camping all by himself to study and paint the giant trees. Apart from breathtaking wilderness and wildlife aplenty there is no infrastructure, no other people around – nobody to lend a hand or sort out trouble. He had to take all supplies with him from Harare.

“I was living it rough – hygiene was at a minimum and it was just about painting. There is nothing else to do. You are completely alone.” Nevertheless it is not advisable to move around too much because there are plenty of predators like lion around that area – particularly down the hill, closer to the river. As he experienced himself one day.

After about a week and a half he ran out of water and had to get down to a spring for a refill. That water source is permanent and therefore attracts a lot of game. “Easy prey” for the lion – all they have to do is sit there and wait.

Wayne took a bath “frolicking, jumping around, being a fool, and enjoying the refreshing water.” After he finished he gathered up his belongings and looked up the riverbed.

“I noticed that they were just right there – you know how they line up. You know how still they are.” Since it was midday the big cats were rather sleepy and not interested in a hunt. “But there – nine lion were watching my display of frivolity. And in a horror I reversed out of there.” 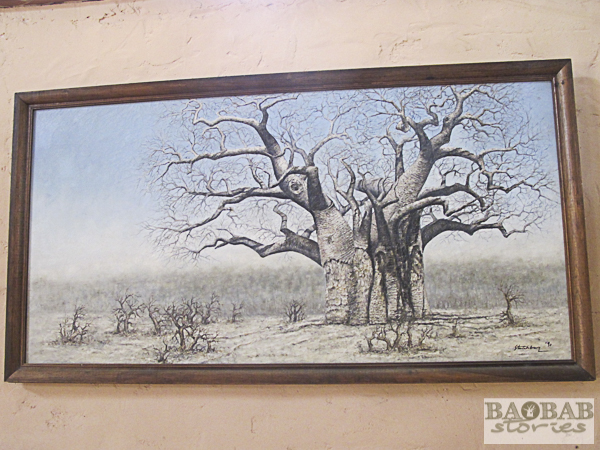 Got to be Strong for the Wind

Wayne relates his passion for baobab to their being “so sculptural”. He started to appreciate baobab when he began to paint live or “en plein air” as it is called amongst artists. The trees are rooted to their spot and one can go back time and again.

Yet, Wayne relates another topic to baobabs – “they have got something really spiritual about them.” The trees can grow 1000 years and older. They have “seen lots” and their history of survival is impressive, for example managing various droughts and experiencing generations of other trees coming and going.

Although he is a sculptor, Wayne says he has never done a sculptural interpretation of baobab but rather painted the trees. Nevertheless he observed another sculptor at work at Chitaki: the wind. “You see these huge things bend and then they howl in the breeze – it is quite surreal and even spooky when that wind comes up at night.”

According to Wayne, the strong Chitaki wind is prevailing and as consistent as the sunrise every morning almost always blowing in that same direction. “You look at those trees and see where the wind comes from – the shape was made by the wind.”

He says it took a while “for the penny to drop” until he discovered the underlying rule. Eventually, he understood that you’ve “got to be strong for the wind – can’t be going out that way.” He observed that the baobabs adjust and their protected back ends look different. 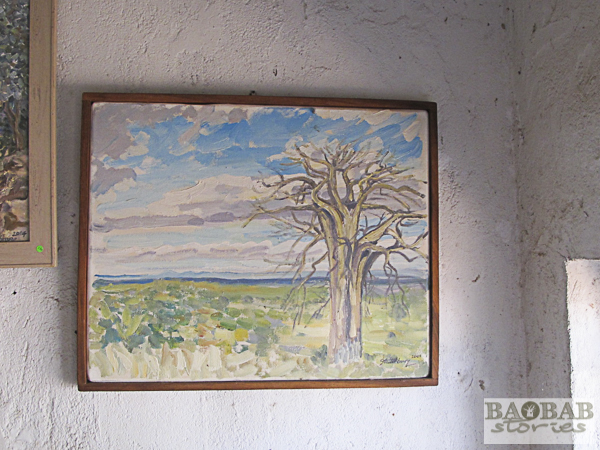 While we talk another one of Wayne’s baobab stories surfaces. There is a special baobab tree at Chikwenya near Mana Pools where his parents operated a camp long time ago. The tree was of enormous size and featured a big hole leading to a cave inside.

One could climb into the hole and find pots and other traditional “keep quieters” as he calls the gifts for the deceased just like those used at traditional burial sites. On the inside people had placed pegs reaching up into the limbs – some of which were hollow as the trunk.

As the artist recalls Chief Chikwenya’s sister was buried in one of the enormous branches. Her relatives had sealed this extraordinary grave with mud which was still there when Wayne saw it. We conclude that it must have been important people who were buried in branches of baobabs because they make impressive mausoleums. 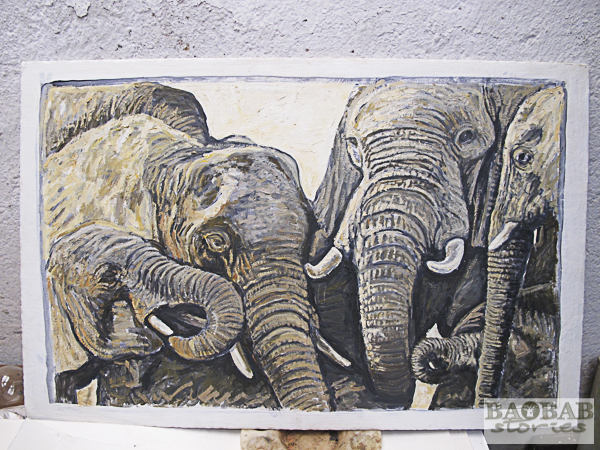 As we soon find out, lion were not the only animals Wayne came across on his baobab adventures. While he was painting a baobab at Chitaki he heard elephants coming down to the river.

Although the wind was in his favour he decided to abandon his painting post. In lack of an alternative hide out he decided to climb a baobab. One of the elephants came straight to the tree and started scratching and rubbing its skin on the shiny bark.

The adventurer looked down on the pachyderm which he remembers being bigger than a Land Rover. Its back was so broad that it had collected sticks, leaves and dust on it.

The animal started to walk around the tree, still rubbing its skin. All of a sudden it stopped. Although Wayne was very quiet the giant must have gotten a drift of him. Its big trunk was slowly moving up the tree in Wayne’s direction.

Sniffing at the Ankle

The latter wondering whether he had climbed high enough. The elephant made a real effort to sniff out what was up there in the tree. And finally, the tip of the trunk came alarmingly close to Wayne’s ankle.

Suddenly, the itchy skin seemed back in focus, the elephant stopped investigating the tree and continued scratching its skin. This time not at ease with the world, the quest of what was up the tree still troubling him.

A little while later the giant continued its search, this time seemingly annoyed because it could not figure out where Wayne was hiding. The animal had not grasped that the artist was still right above him. Eventually the elephant gave up and turned away. Wayne could not resist and shouted “ey”. The animal stopped in its track – but did not come back. Maybe it thought “next time”. 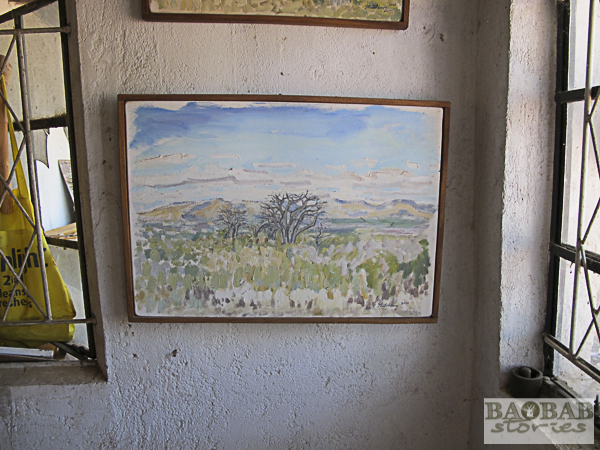 His favourite time to paint baobabs is around July/August in Zimbabwe when “everything is a bit brown”. Leaves would hinder a clear view and when he works he prefers to see their structure. With leaves “it is just this big bulb – and I need to get an idea of the whole shape”.

Their very distinct shape inspires Wayne to think about their lineage while he sits and paints for hours on end. “When you are drawing them a lot you think about relationship and whether that one is a daughter of that tree.” He is fascinated by the thought of a DNA analysis revealing where and how generations of the trees have “travelled”.

People with a Love for Baobab

Our conversation moves on to our last topic and we agree that it would be a great thing to have a special baobab event where we could bring all people with a love for baobab together. “It is like we are a big family – you’d be surprised”, Wayne says. Everyone has their little attachment to the tree.

Baobabs are special and easily identifiable – people use them for so many purposes – for example as landmarks for orientation. One would not do that with a mopane tree… We could chat on for hours about baobabs but unfortunately another appointment is calling – nevertheless the idea of a “Baobab Appreciation Day” has started to form.