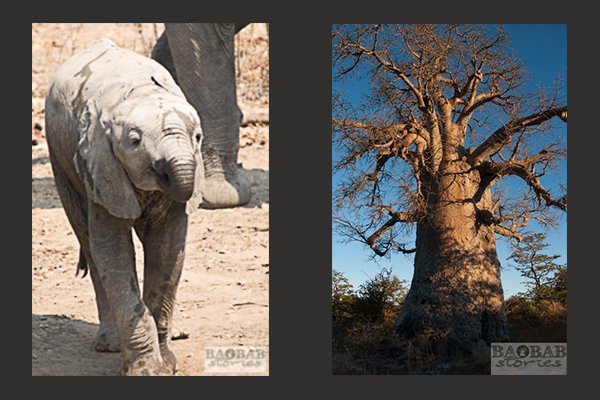 What a fascinating sight: A mighty old bull elephant rests under a huge baobab. He rubs his backside on the tree bark with relish. Alongside his beauty endeavor he cracks one baobab fruit after another and enjoys the healthy properties. The ripe fruit just wait on the ground to be collected. 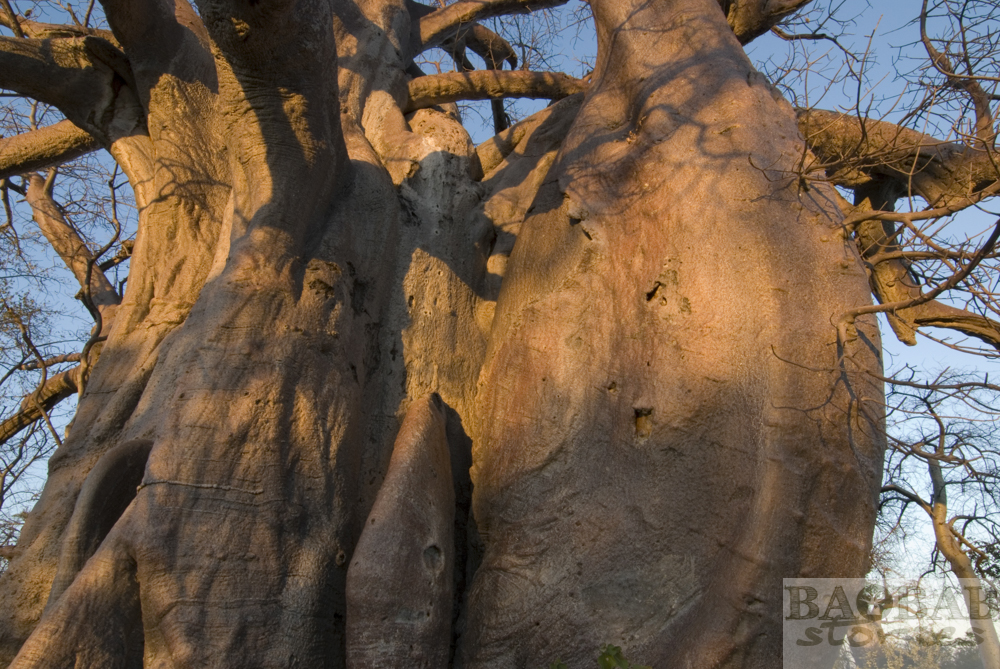 Baobab and Elephant – both are icons of Africa, easily identifiable from a distance by their distinctive shape. Both can reach considerable sizes and ideally reach very old age. They even share a similar color spectrum. It is therefore not surprising that Baobabs are sometimes referred to as “elephants” in the kingdom of plants. 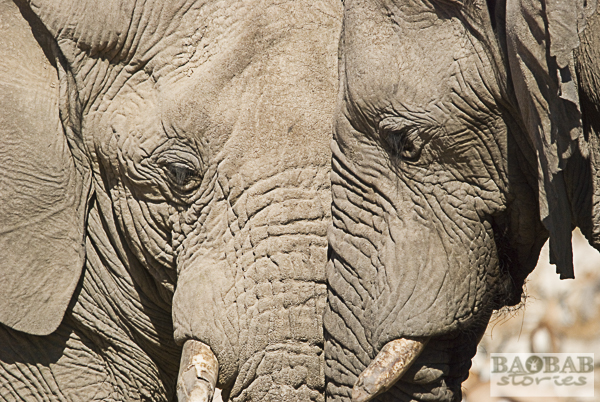 A symbiotic relationship connects Baobab and Elephant – “friendship” might be too strong a word. In many regions of sub-Saharan Africa, they share the same habitat: hot, dry savannah. Where the baobabs have no choice as to the location, the elephants can move on their long walks to more pleasing areas. Both creatures are equipped for their environment optimally.

Are Baobab and Elephant pachyderms?

Apparently both have a “thick” skin – the elephant’s is several centimeters thick at some spots. However, it is very sensitive and elephants are said to be able to feel when a fly alights on them. 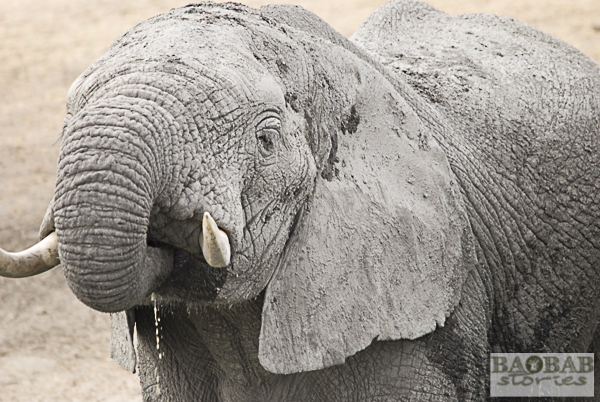 Baobabs in turn have a bark. It protects the tree from most environmental impacts, but cannot keep off everything. Depending on the location and intensity of solar radiation baobabs can catch sunburn. On affected spots the bark becomes thicker. Sometimes it also shows a different color than other areas of the tree. 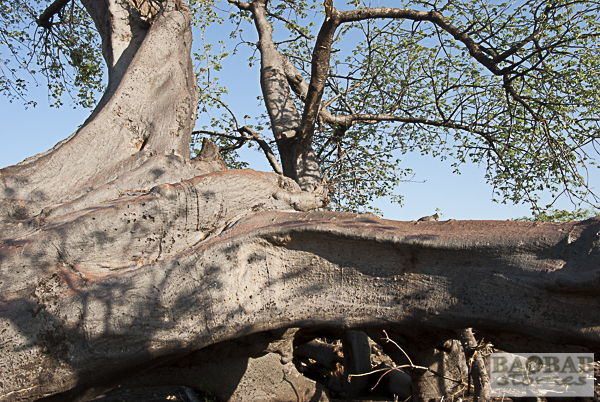 Baobab with “Sunburn” on the Top Side of its Branches

Baobabs have no choice: they are rooted to the spot where the once tiny seed germinated. They are frugal contemporaries living on scarce nutrients and a minimal amount of water.  Nevertheless they need some water – and if they do not get it over long periods they dry out and die.

Their ability to store enormous amounts of water during the rainy season usually helps them to survive dry periods. Large specimens can store up to 140,000 liters and more in specific cells in their trunk and branches. Thus, they are optimally equipped for droughts. 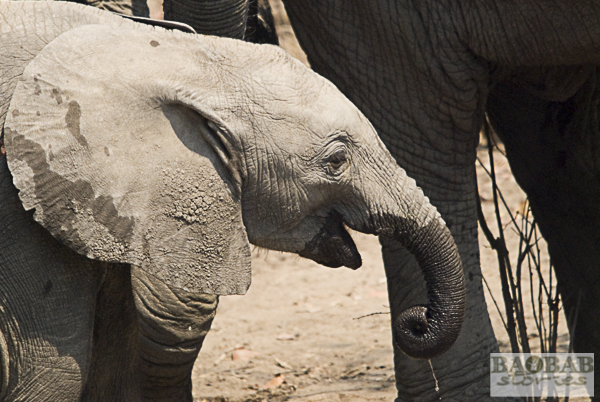 Elephants depend on water on a more regular basis. They need a water supply of more than 100 liters per animal per day. Bathing their skin in mud is important for their skin, too. After bathing they dust themselves with sand or soil. Once the thick layer of mud and sand is dry, the skin care procedure includes a thorough rubbing against rocks or the bark of trees.

In times of water shortage or elephant overpopulation, baobabs become very popular with the pachyderms. They rip large pieces from the trunks of the trees or tear off entire branches to get to nutrients and stored water. 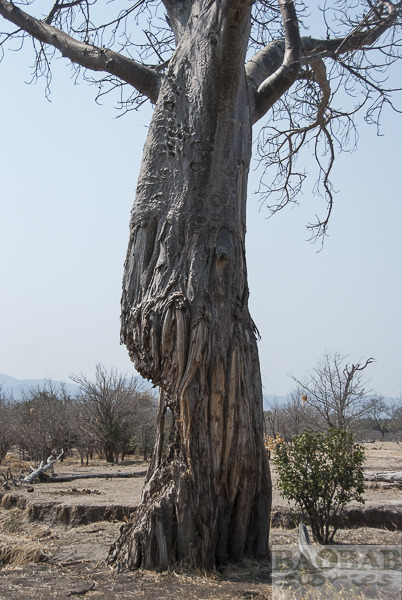 Particularly in places with a high population density of elephants many battered baobab specimen can be seen, for example in Mana Pools National Park (Zimbabwe) or Chobe National Park (Botsuana). While the ancient plants endure elephant attacks to an amazing extent – at some point they give in to the injuries.

Then, the trees collapse and dry out – usually to the benefit of the elephants who make use of them as a last snack if they are around. The remaining part of recycling is done by termites and other insects. After about a year nothing is left from the erstwhile giants. 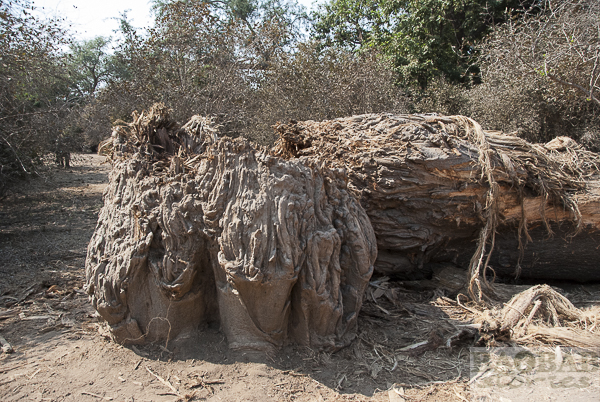 Dead Baobab and Elephant behind a bush in the background, at Mana Pools

On the other hand, elephants are said to contribute to the spreading and propagation of baobabs. Firstly, the healthy and delicious baobab fruit powder is stored in a hard shell together with many seeds. Elephants crack the fruit and swallow everything including the seeds. While they move through the digestive tract the digestive juices soften the hard seed coats.

In the end the seeds and other digestive components are disposed of in a large pile of dung: ideal conditions for germination. The treatment with digestive juices made the seed coats permeable and the remains of a former feast provide warmth, moisture and nutrients. After a perfect kick off, all the little saplings need to be successful are regular inputs of water and a warm environment. 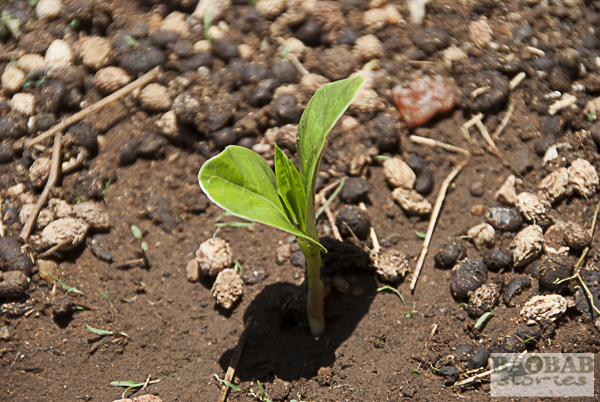 Living with elephants seems to be difficult for baobabs – particularly during times of droughts – but life without the gentle giants does not seem to work either.