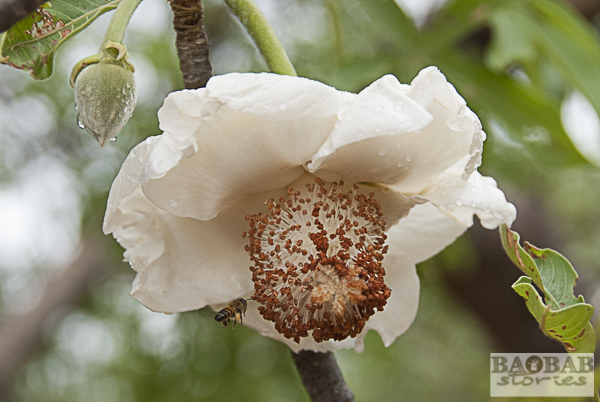 Every year at the beginning of the rainy season a very special spectacle of a silent kind takes place in the baobab kingdom. Dangling down from long strings baobab flowers open their buds. That comes with a very special feature: to open their flowers baobabs prefer the warm afternoon and evening hours. On large trees, hundreds of them unfold their petals synchronously and in seconds like small umbrellas.

Beautiful for just one night

A blossom only blooms for one night – during this time the pollinators have to get active for for it to be able to produce fruit. Therefore it has to put something on offer to attract those potential pollinators. How does that work, and who actually takes care of pollination at night when the usual suspects like bees and beetles rest peacefully? 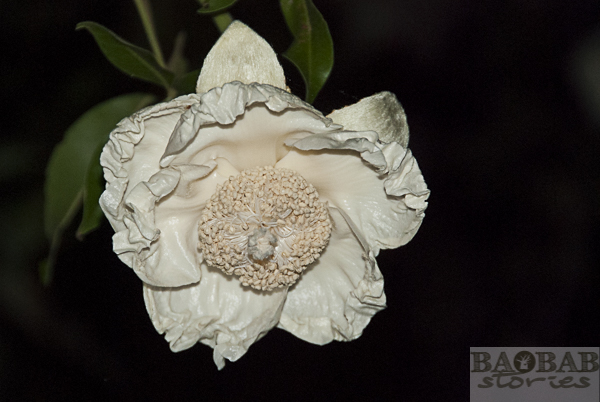 Baobab flowers are pollinated at night

With the baobabs it is – depending on the region – a very special “crowd”: Bushbabies, hawkmoth and fruit bats take over this important task. Like many other flowers, those of the baobab also produce nectar and exude a seductive scent. In principle, this is no different from plants that flower during the day. However, the baobabs’ flowers have a special scent. In some places they are said to smell like carrion – anything but sweet and lovely. I can’t confirm that. In South Africa and Zimbabwe, I have experienced their scent as strong – but nothing compared to real carrion, which has started to decay and lay in the blazing heat of the savannah for days. 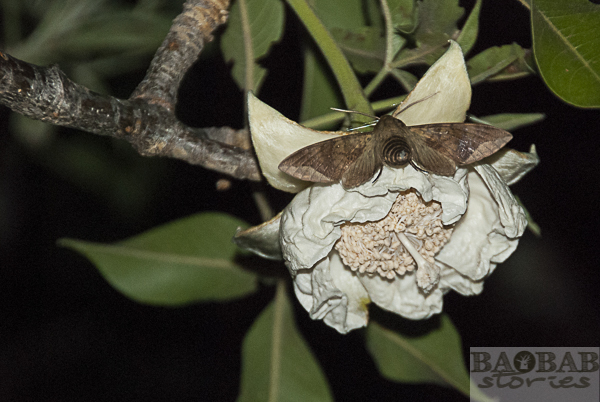 So what exactly attracts pollinators and is it comparable to other countries where baobabs are found? In order to find an answer to this question, Dr. Sarah Venter joined us on a trip to the Limpopo Province in South Africa. At the moment we have gathered underneath a big old baobab which we identified in the afternoon – taking a glimpse at its flowers now. 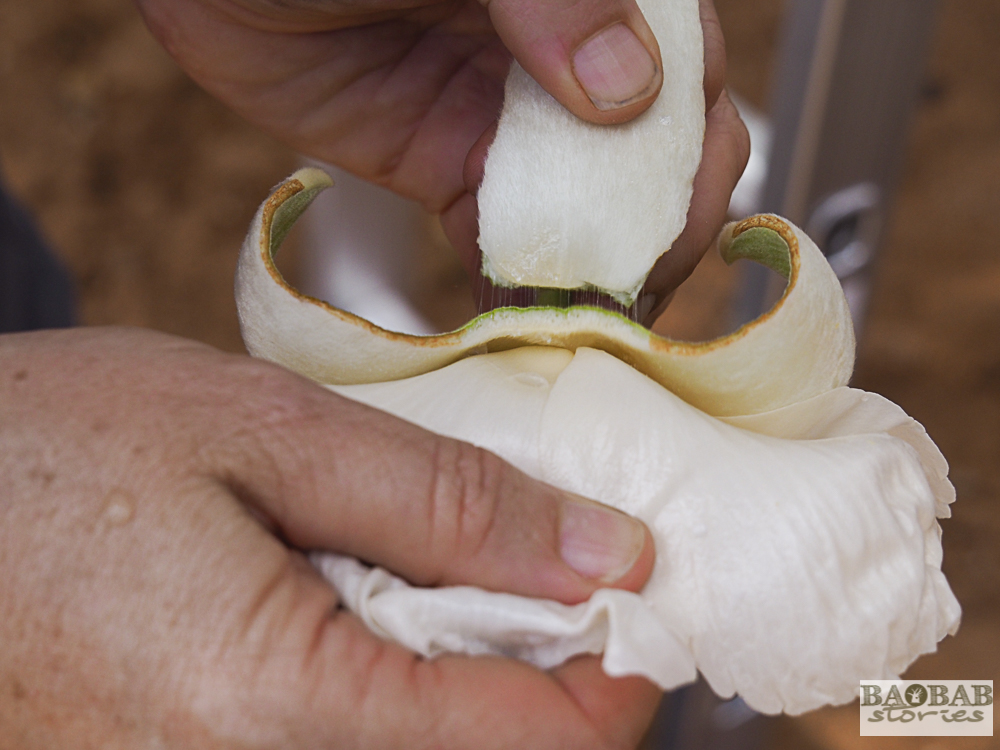 The Baobab of choice

We chose this specific tree because some of its flowers hang low enough so that we can still reach them with the help of a ladder. Meanwhile it is pitch dark in the countryside. A light rain is falling and the wind is gently blowing through the full canopy of leaves on the tree. The ladder stands ready under a freshly opened blossom. Noemie Bauer, who is also interested in this baobab project, climbs it courageously. She puts a bag over the blossom immediately and fastens it firmly with cable ties above the petals. No air must escape from the bag. All we can do now is wait. 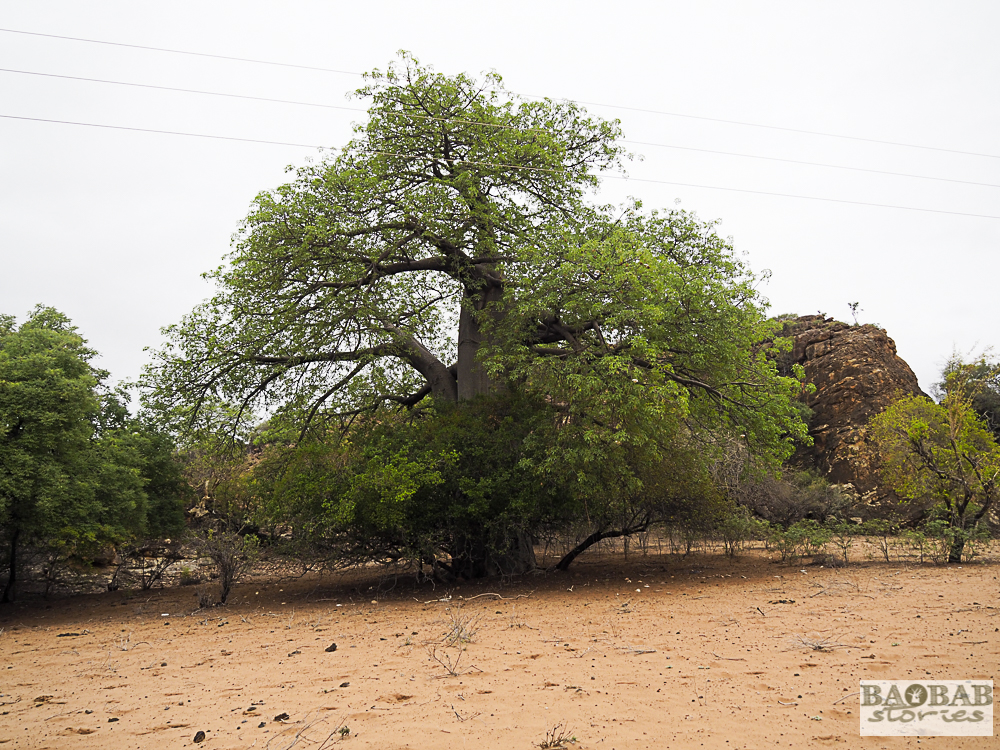 Capturing the scent of the baobabs

After an hour in the darkness – no star is visible, at least the rain has stopped – we take action again. Noemie climbs the ladder and cuts off a corner of the bag. She inserts a tube. Using a special device that works like a syringe, she draws air from the bag into a small container – and extracts the concentrated scent of the baobab flower, so to speak. She seals the container airthight and labels it for further examination in the laboratory. Scientists will compare their subsequent analysis results with scent samples from other locations. 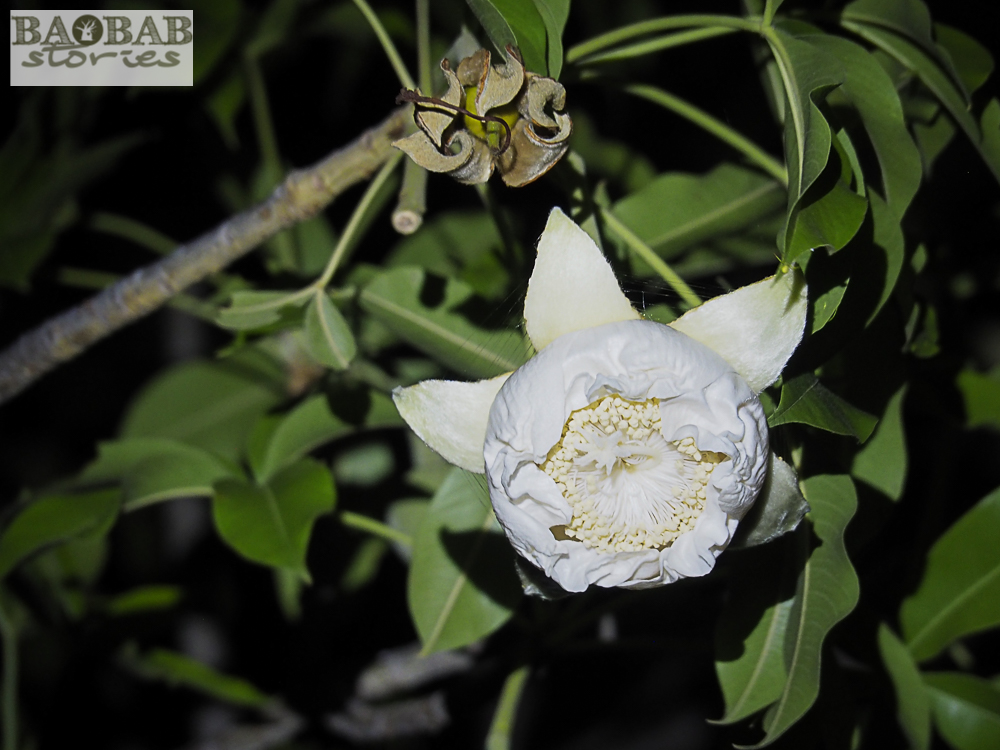 Investigating the behaviour of the pollinators

Information obtained in this way should help to better understand the behaviour of pollinators. Observations in recent years have shown that hawkmoths are mainly responsible for pollinating the flowers in the Limpopo Province. In other regions this important task is taken over by bats or bush babies. 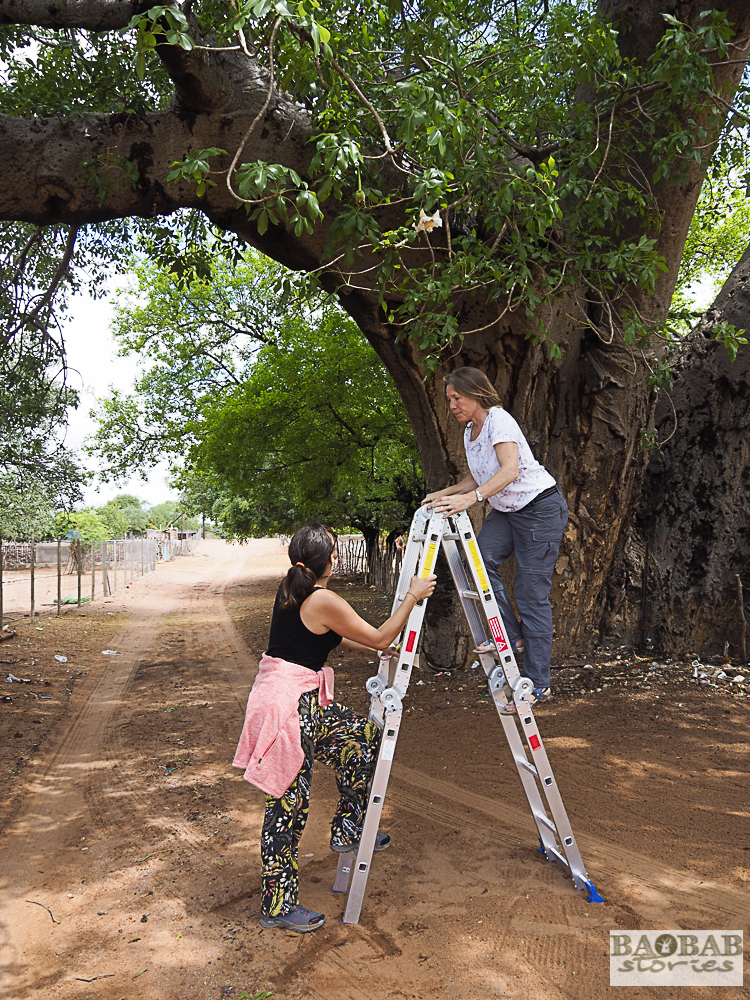 Ensuring the survival of the baobabs

Ultimately, the researchers also expect the results to provide insights that will help to ensure that there will be baobabs in the years to come. If the behaviour of the pollinators is understood in a better way, their survival can be protected and supported. Which in turn benefits the baobabs. Their fate is connected to that of their pollinators: if their numbers dwindle, that of the baobabs will do so, too. 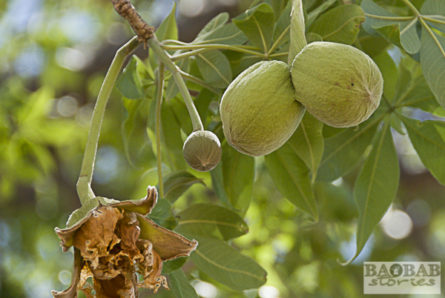 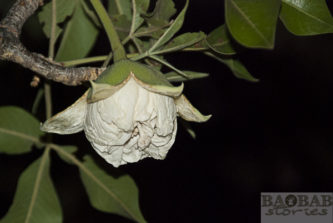 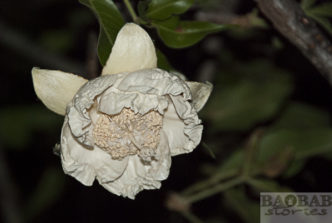 6 Replies to “Baobab scent: how do baobab flowers smell?”