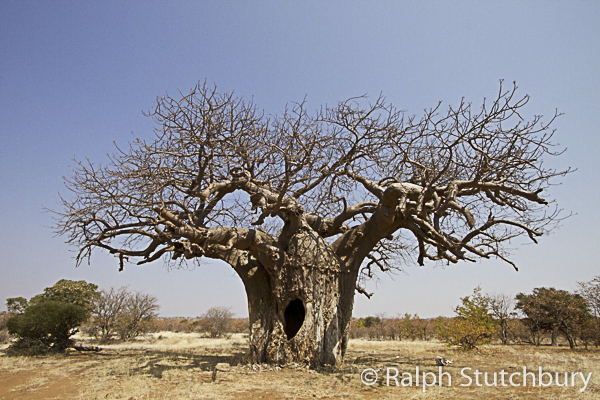 “You cannot just walk past a baobab, without noticing it,” said Ralph Stutchbury during our interview. The photographer, cameraman, conservationist and author lives in Harare, Zimbabwe.

Long before I met Ralph in person, I came across his work. While searching the internet for more information on baobabs in Namibia I found a preview of his baobab documentary. Such a treasure unearthed, I was electrified and thought that ‘I have to meet this Ralph Stutchbury one day.’

My friend Rozanne Tunmer from Harare surprised me with a special birthday gift in 2014: she sent a lovely coffee-table book featuring baobabs only – published by Ralph Stutchbury. Again, I was enthused – not only by the book, but the mere fact that there is another person out there focusing on the same subject apart from experts with a scientific interest. 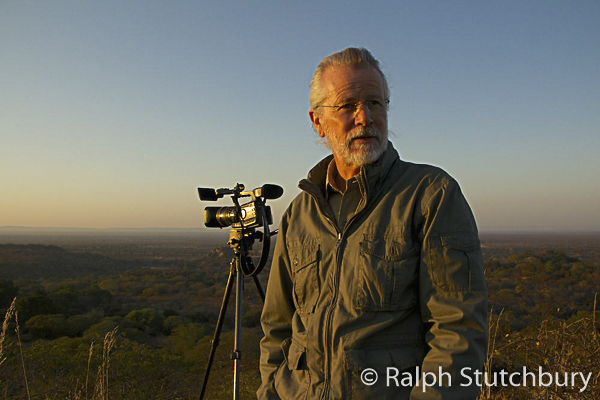 A year later, I finally met Ralph Stutchbury and got my interview. Ralph invited Rozanne and me to his studio and I got to see his brand new and nearly finished baobab documentary. I sat there and watched in awe.

Ralph managed an entertaining mix of little stories and myths about baobabs with geographical, biological, ecological and historical facts. He produced a great overview of the complex “ecosystem baobab”.

Baobabs and Elephants are infectious

His brother Wayne inspired him with his love for baobabs. Both grew up very close to nature and Ralph adds “in the bush” with a smile on his face. Wayne decided early to pursue an artistic career. The brothers spent a lot of time together. 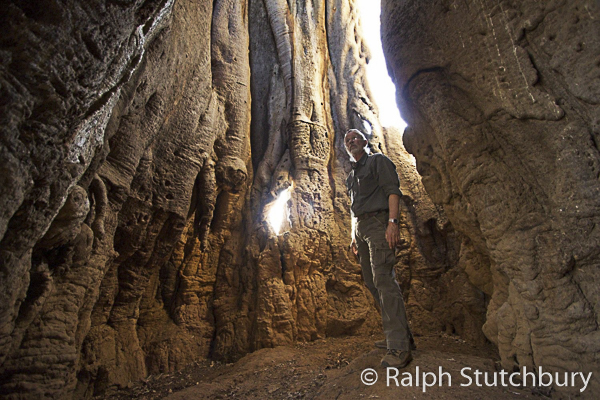 Ralph Stutchbury in a hollow Baobab

Enough Reason to be Fascinated

He explains his enthusiasm with a convincing argument. Elephants and baobabs were “the largest living mammals and the largest living trees on the African continent. That is reason enough to be fascinated”, he adds.

The basis of his film is in depth research – for that he has spoken with numerous baobab users and experts and he states “the more I learn about the trees, the more fascinating they become.”

He filmed baobabs in their natural habitat and ventured into the most remote places. Among the baobab “hot spots” in the film feature Epupa Falls in Namibia, Lekhubu Island and Baines Baobabs in Botswana, Mana Pools and Gonarezhou in Zimbabwe. 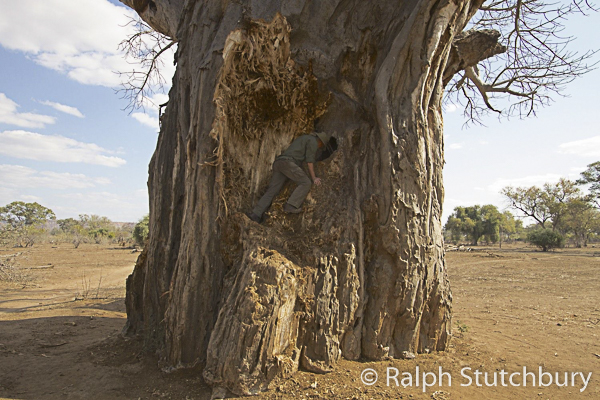 The film is nearly finished but Ralph has not found a broadcaster yet. It seems that getting documentaries à la David Attenborough into a mainstream television program has become difficult. He offers an explanation for that: “No one gets killed in my films, and there are no beautiful women showing their beaming smile.”

The audience expects more “action”: a shark tearing a seal apart in a breathtaking jump or a crocodile drowning a wildebeest with a spectacular rotation into the rivers depths. The peaceful baobab cannot compete with this kind of sensation.

It is not the quality of his filming – because Ralph knows his business. After school he went for training as a journalist and became a professional cameraman. To make a living in the young and aspiring Zimbabwe of the early 1980s, he started his company “Eyes and Ears” for commercial filming.

In Victoria Falls, he filmed Christopher Lee and other actors in a sequence of “Sherlock Holmes”. He stood behind the camera for a music video for Eric Clapton and for a sequence of Paul Simon’s film “Graceland”. In addition he has created a career as a documentary filmmaker with films broadcasted by the BBC, the Discovery Channel and National Geographic. 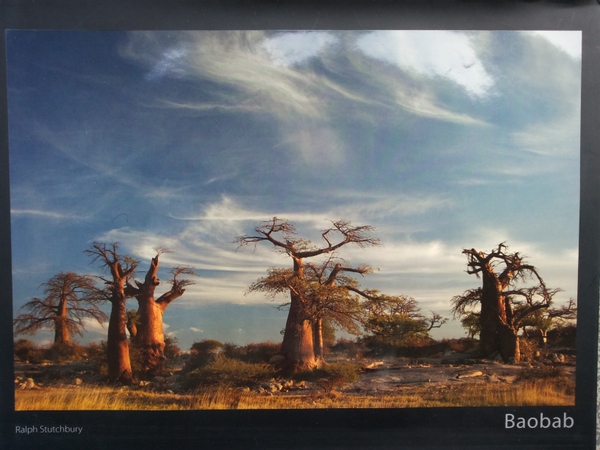 The Baobab fan is deep into the matter and has published the aforementioned book about baobabs on the way. Ever since it has arrived on the market, he receives countless notes on new Baobab locations of its readers. Some are keen to find out more about the locations of the trees and ask for directions. Meanwhile, the author is thinking about a second baobab book. Plenty of material is to his avail.

At the end of our conversation he shows the baobab paintings of his brother Wayne to me. I learn that the latter lives in Harare and I am keen to meet him for an interview, too.

7 Replies to “Baobab Documentary from Zimbabwe”