This is an intriguing specimen of the Baobab family! Tsumkwe Holboom resides nearby the capitol city of the San people in the North-East of Namibia not far from the border to Botsuana.The only passable road that leads into the area was in a very challenging state in 2010. The last 50 kilometers had to be done on a nasty sand-and-pebble Pad. At that time the sand was deep and the motorbike we used surfed quite a bit. Nevertheless – the sight of the beautiful Baobabs was worthwhile the trip.

Particularly the Holboom is a spectacular tree. It is very old and hollow inside. From far one can see the big heart-shaped opening which almost seems like a window into the tree. Drawn by gravity the huge and heavy branches started to grow towards the ground many years ago. Apart from one which stretches high into the sky. Glimpsed from far the scenery resembles a stranded but nevertheless ghostly pirate sailing vessel.

The Tsumkwe Holboom has – like most of the other Baobabs, too, a smooth bark which makes it a bit tricky to climb it. It is not really advisable to climb on old Baobabs anyway. For one it might do damage to the bark, second Baobabs are the home of many other creatures. They make use of the many holes and niches. Black mambas are particularly fond of them and like to reside inside of the trees or lie on the huge branches in the sun. One has to be very alert around Baobabs for these snakes since they can be lethal.

The area around Tsumkwe has lost a great attraction some years ago: the Grooteboom. An enormous Baobab, larger than the Tsumkwe Holboom, had supposedly arrived at its end and collapsed. 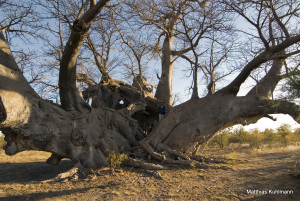