Yes this town helps to fulfill not only this. One could even say you can dream underneath a huge and hollow Baobab! Outapi is the home town of many Baobabs and it hosts a Heritage Center which has been built right around a spectacular and very old Baobab. Part of the facility is a camp ground which was set up underneath the giant tree. Nevertheless – dreaming could prove a bit difficult since Outapi never sleeps! Although the sound carpet slightly differs from mega cities, the sounds will still keep you awake. Donkeys, roosters or other unidentified creatures communicate at full volume all night.

The heritage center at Outapi is operated by a community initiative. They generate income with tourist groups attracted by the incredible Baobab and a long village history. The tree is more than 1000 years old. It is hollow – a feature that is often seen in Baobabs of that age. In former times the tree was used as a shelter for humans and animals alike. Later it served as a prision, post office and chapel.

Outapi does not only have this enormous Baobab on display – literally at each corner one can see phantastic Baobabs. The cityskape without the giants is not to be thought of. Outapi is definitely worth a visit. 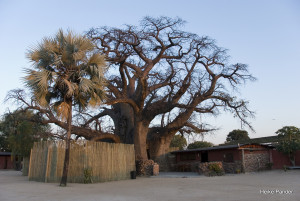