Namushasha is a perfect location for Baobabs with an appealing name apparently derived from a fairy tale and tailor-made for Baobabs. It is located in northern Namibia, about 20 kilometers away from the main road running from Rundu to Katima Mulilo in the Eastern Zambezi Province, formerly known as Caprivi.

In early 2014 a heritage center was built nearby Namushasha River Lodge. The two Namushasha Baobabs reside in the middle of the village museum. The giants are surrounded by straw huts. They grow like twins next to each other – but interestingly enough into opposite directions. An intriguing sight. What made them grow into opposite directions – this will remain a mystery. An attempt to explain: Baobabs usually grow like solitary icons with some distance to other Baobab neighbours. Since the two seeds seem to have fallen on the same spot the Namushasha Baobabs might have decided to grow as far apart as possible in this same location.

Boards in the village museum provide information about habits and traditions of the people in the area and about Namushasha Baobabs and their uses in former times and today. The site is special because one can get information directly from the people running the heritage center – they are all native to the area. 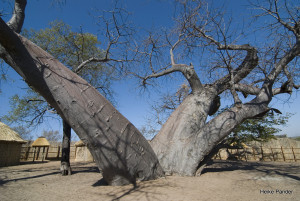