Dry, rough and wild – this is the north of Namibia and in the midst of it reside incredible Baobabs at Epupa Falls. The falls are fed by the Kunene River which builds the natural border with Angola and meanders through the landscape.

Baobabs at Epupa Falls are located in the territory of the Himba who used to live on animal husbandry for many years. Some Himba still do. As additional income they have discovered money from Tourism. Particularly Himba women are famous for their hairstyle and the red ochre they put on their skins. the women take natural soil pigments and mix them with fat/butter which is applied to the skin. In Opuwo tourists can take pictures of the traditionally styled women – but they have to be aware that most of the women expect to be paid if their picture is taken.

Baobabs at Epupa Falls live on the banks of the river – sometimes they firmly cling on bare rock with their roots. Some look as if they were to crash into the raging waters of the Kunene at any moment. How can they survive there? The most spectacular sight are four Baobabs that have settled on a cliff in the middle of the falls. They have managed to flourish there for many years. Those trees have made Epupa Falls famous. Especially in light of the setting sun the place unfolds its magic – the sight of the Baobabs on the bare rock attracts attention like a magnet. As the sun sets the shadow of the nearby hill wanders from right to left. And with this move it slowly takes the light off each of the Baobabs on the cliff. One of nature’s magnificent spectacles: Sunset with Baobabs at Epupa Falls. 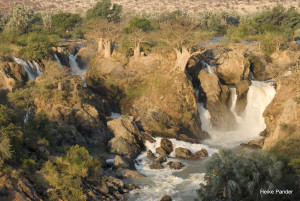