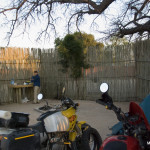 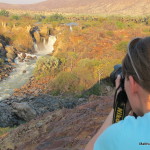 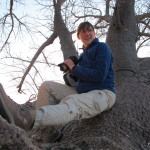 I was desperate to see Baobabs – as many as possible. I used some “time off” in 2010 to travel with my husband on two motorbikes to Africa. We intended to ride from Bonn to Cape Town in South Africa. Along the route I planned to take pictures of Baobabs, talk to people and collect as many stories about the trees as I could. It turned out to be a great and adventurous nine month baobab-motorbiketour.

“Not all went as planned” as a German magazine for motorcycle travel enthusiasts Motorrad Abenteuer titled our travel report we could publish with them in March/April 2012. The title was very true because the route we had to take was quite different from the one we had started out with. Different reasons contributed to our change of plan but most of all the fact that we could not get the visas for entering the Sudan. We changed plans and started the tour where it was supposed to end: in Capetown. After some technical difficulties with one of our motorbikes we travelled to Namibia, Botsuana, Zambia, Malawi, Mosambique, Zimbabwe, South Africa again, Swaziland and Lesotho. Such a long trip brings many impressions and experiences which I try to bring to paper with my paintings and a book.