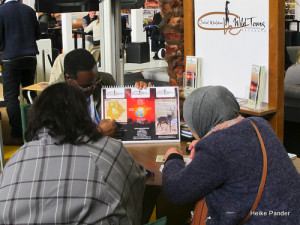 In former times baobabs were used for shelter, water storage or as prisons in Namibia, Botsuana, and other countries. At the International Tourism Fair (ITB) in Berlin, I met Dulang Matija from Botsuana presenting his business. He told me about the prison tree in Kasane, Botsuana. 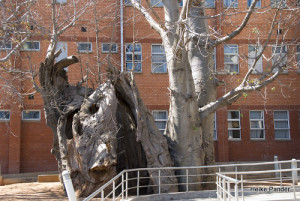 Many old baobabs are hollow inside and so is the old tree at Kasane. But in this case the people in the area have helped along a bit and increased the erosion inside the tree manually. Baobabs can survive this treatment. They form a new layer of bark on top of the injury. The tree in Kasane was used as a prison for a long time. Culprits had been imprisoned and “parked” there before they were relocated to other prisons. The Baobab is still there and alive but it has changed its structure over the years. The main stem with the prison cell has split up in several spots and cannot be used as a prison any more. Only fragments are left of it. Nevertheless these are still alive. Attached to the main stem grow two baobabs – it would be interesting to know whether these are branches of the main tree or two genetically separate baobabs. 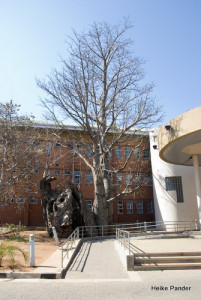 A new solution for the prison had to be found. The authorities were obviously inspired by the old prison tree. They built a new and much larger police station right behind it. The new building has certainly more prison cells than the old Baobab. I could not find out whether increasing numbers of offenders in the region had led to this step. Kasane and the area are considered as relatively safe. A more likely explanation of why the police station was built is the proximity of the Zambian and Zimbabwean border. While we talked at the fair, I remembered that the tree is an “old friend” of mine – I had seen and photographed it during my motorcycle trip a few years ago.

Exceptional specimens of baobabs do not only reside in Kasane. They can be found in eastern Botsuana, for example in the Tswapong region. Some of the famous trees are Baines, Greens and Chapman’s Baobabs and those on Lekhubu Island amidst the salt pans of magical Makgadikgadi. Impressive giants can also be found on “Planet Baobab”, a camping and lodge facility.

4 Replies to “Imprisoned in a Baobab”