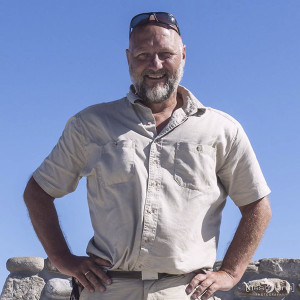 Makuleke Concession in the northern part of the Kruger National Park in South Africa hosts some of the most beautiful and magnificent baobabs in the country. Hans-Jürgen Keck, a passionate photographer, photography coach and Africa fan has been there in 2014. He participated in a Safari Tour Guide Training with Eco Training, a company operating in the area. Field trips and walking safaris in the bush led him and the other participants to different baobab locations. Keck says he has never seen so many baobabs in one place before. He is fascinated by the many different impressions of the trees he got at different times of the day and under changing light conditions – as light is especially important for photographers. He is still excited about the lasting effect the trees had on him – particularly in the setting sun when the trees seemed to glow. 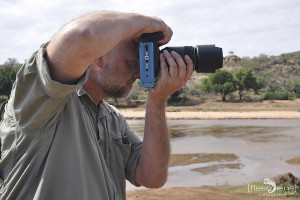 The group frequently took advantage of different baobabs as meeting places and starting points for their bushwalks. At big baobabs they sat down in the shade, resting or exchanging experiences. Baobabs have been used as landmarks for thousands of years – thanks to their excellent visibility and their unique forms. Every tree is different and has specific characteristics and can therefore be distinguished from others easily. The trainees learned how to read and interpret marks and signs of other creatures on and around the trees. Gnawed bark or broken branches suggest frequent visits of elephants. Form and shape of the footprints as well as elephant dung provide information about the time when the animals have passed the tree. Especially towards the end of the dry season when water in the habitat of the baobabs is scarce, elephant footprints can be seen more frequently. The animals like to chew on branches and bark of baobabs to get water and nutrients. Baobabs can survive these interventions to an amazing extent. The Safari Guides even found an elephant skeleton underneath one of the baobabs. A relyable sign that the pachyderms return to this place over and over again. Elephants visit their dead kin on their walks, sniff at the bones and move them. 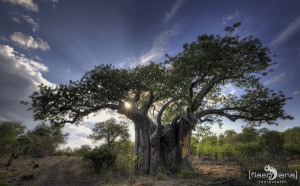 Spectacular Sunset with Baobabs and Elephants

During one of the bushwalks, the group had a particularly impressive experience. They climbed along a ridge with excellent views over the seemingly endless expanse of bushveld. A family of huge baobabs resided at the spot. Some of the giants stood in a nearly perfect circle. From a grove with fever trees a herd of elephants emerged and came towards them slowly. From their location the group had a good view of the animals enjoying their dinner. Surrounded by this stunning natural beauty they experienced a breath-taking sunset. On the way back, they moved slowly as they came very close to the elephants. “I cannot imagine anything better”, Keck says still deeply moved. In the presence of wild animals you never know exactly what will happen the next moment. One tends to be very alert and pays close attention to developments in the environment. The group was vigilant and taken at the same time by the beauty of nature. It was very quiet – no one wanted to talk. “There is nothing better than experiencing wilderness and the bush on foot” the photographer rounds up this memory. 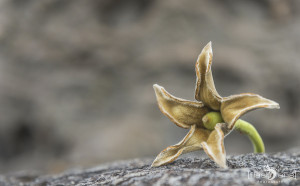 Carrion Smell and a Heap of Dust

The dry baobab blossom was captured during another bushwalk in the Tuli Block in Botswana, several hours’ drive away from the group’s base camp in South Africa. At the time of the visit the baobabs had just started to open their blossoms. A single flower shows its beauty for one day only. It opens its petals in the afternoon and exudes its unpleasant smell – like carrion. Bats, bush babies and moths love the baobab flowers. The pollen of the flowers sticks to their bodies and the animlas help to distribute it. With some luck one can watch swarms of bats around the trees at night by using a torch, says Keck. During the next morning the blossoms wither quickly and fall off. The group learned a lot about baobabs. Young trees differ completely in their appearance from the old icons. The youngsters usually grow a smooth and straight trunk with branches pointing upwards. This growth pattern helps the baobab to protect its leaves from browsing animals like goats or cattle. Baobabs develop their typical shape only after many years of growing in the bush. The wood of a baobab is not alike that of oak or beech trees. It resembles reed which makes it soft and light. The fibres help the trees to store huge amounts of water in their branches, trunks and cavities. Humans like to use water stored in baobabs, too. The trees have shallow roots and therefore depend on surface water. During rainy periods they have to absorb as much water as possible in a short time and save it. Unfortunately, the shallow roots make them vulnerable to uprooting during violent storms. While out on one of their bushwalks the group came accross a dead baobab. A large amount of fibres lay distributed around the fallen giant. Dead baobabs rot quickly and are recycled by innumerable small creatures, mostly insects. Elefants help along as they make use of the branches and bark. A heap of dust is all that reamins of the giant after a short period of time. 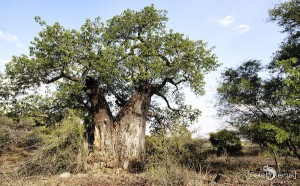 Baobabs do not only attract all kinds of creatures for a nap in their shade. The size of the trees invite visitors to climb up the trunk for a better view. This is not always desirable as it may have a negative impact on the bark. The trees are exposed to manyfold difficult environmental conditions – therefore climbing the trunks inflicts additional damage. In some countries climbing baobabs is prohibited by law. Secondly, the bark of baobabs can be very smooth – even if climbing the trunk is successful – coming down might prove difficult as one of the participants had to learn. Without help from the group she might have been stuck up in the tree. A further reason to be carful around baobabs are snakes. Baobabs are one of the favourite dwellings of the black mamba, a highly venomous snake. It prefers to reside in the many caves and niches of the trees. A bite of the snake can be fatal without treatment. The snake is particularly dangerous because it drops down from branches on its victims. A thorough screening of the environment is very advisable before settling under a baobab or deciding to climb it. 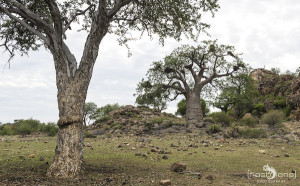