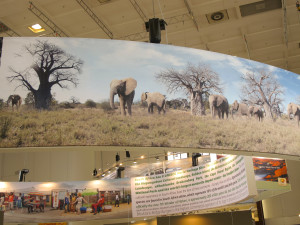 Baobabs can be spotted “everywhere” – it is not surprising to me that I found some upon entry of the International Tourism Fair (ITB) in Berlin, the world’s largest travel event. The giants stand out because of their size. This time as picture prints and not as “real” ones. Almost life-sized examples of the trees attract the visitor’s attention. Exactly where one would have expected them to be: in Hall 20, the market place for the travel experts and exhibitors of Southern Africa. 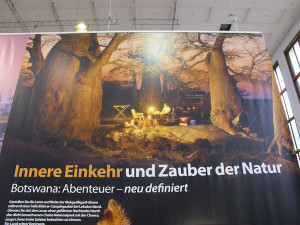 Nicely photographed specimens in the light of the setting sun or next to impressive herds of elephants catch the eye. The floral pachyderms are well represented at the booth of South Africa, Botsuana, Angola and Madagascar. The most impressive shot stems from Botsuana. The stunning photograph was taken at Lekhubu Island, one of the most magical baobab locations in the southern African Region. The trees live on an island in the salt pans of the Makgadikgadi, which is part of the Kalahari ecosystem. Depending on the light the baobabs there seem to be pink! 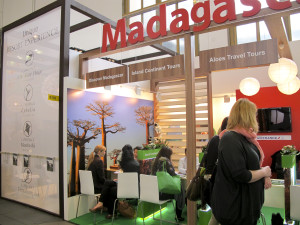 Madagascar is another exciting location for exceptional baobabs. The island with its isolated ecosystem and marvelous endemic species does not only have unique wildlife. It hosts six of the eight different baobab species – these are nowhere else to be found but unfortunately meanwhile endangered. The giants are in fierce competition to agricultural lands. Angola has recognized the value of its baobabs. I fail to get detailed information about the whereabouts of baobabs there. But the specimen on the advertisement of the booth dominates the visual impression and makes up for the lack of information – at least for me. 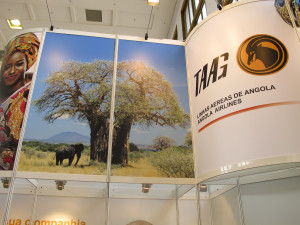 Baobabs in their specific forms and shapes are easily identifyable even from far away. Therefore it is not surprising to find them as advertising mediums at the ITB and on many promotion materials elsewhere. Although I could not see “real” Baobabs at the fair – one thing is certain: my desire to travel is back and I cannot wait to visit the baobabs again.

3 Replies to “Baobabs at ITB”