Baobabs are widespread in Zambia, traditionally protected and played a major role in the animistic belief in spirits. They grow mainly along the Zambezi and Luangwa rivers. Manfred Schumacher shared the story of a baobab with me which was torn down in Maamba, Southern Province, despite the fact of cultural taboos. Schumacher has lived several years in Zambia and Zimbabwe. He still has strong connections to the region through old friends and his import business with crafts. Maamba is located on the Zambezi River and is famous for its coal mining. At the same time it is the hottest place in Zambia – the temperatures climb up to 45 degrees Celsius in summer.

The baobab in this story had a diameter of about 1.5 meters, was estimated 500 years of age and certainly there long before the house besides which it resided. The owner had built the house very close to the tree. One day, he sold the house. The new owner, a merchant, was not pleased with the proximity of the giant to the house and wanted to get rid of it.

This is unusual because baobabs were protected, feared and appreciated at the same time – they could not easily be cut down. For one thing, there was widespread belief in ghosts in rural areas. Baobabs were said to serve as residences of said ghosts. Nobody intended to offend these spirits in any case, because that could have a negative impact on life and limb. On the other hand, people used various components of the trees, for example fruit, seeds, bark and leaves. In addition to the belief in spirits nocturnal owls were interpreted as bad omen. They love to use baobabs during the day as “hang out”, hiding or nesting. Especially older and therefore usually very large specimens are popular with the birds. The trees provide a good starting point for hunting prey, have many niches and caves and are therefore often approached as landing spots.

Despite all reason, the new owner of the house did not feel comfortable near the old giant with its ghosts and evil omens. He inflicted injuries to the bark of the tree and maltreated it over a longer period of time which eventually resulted in severe damage. The Baobab did not recover and could not sprout leaves any more. This served the merchant well. He took advantage of the situation and chopped down the tree completely. When Schumacher discovered it, the giant had already tumbled down with roots half torn from the ground. The fear of the house owner of ghosts and negative signs had finally brought the burly Methuselah down. 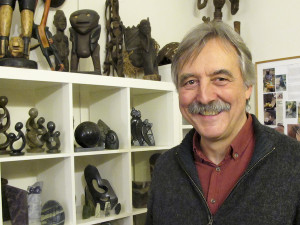 2 Replies to “Baobabs – the fear of ghosts and owls”