Baobabs – Superfruit: Rich in vitamin C, fiber, antioxidants, and other important ingredients. In Africa, people have used baobabs for thousands of years. With a few exceptions, the Baobab was known to the world mostly by its bizarre appearance – this is now changing rapidly. The powder of baobab fruit is growing in popularity – particularly in a vegan or vegetarian diet due to its many positive components. The cosmetics industry takes advantage of the beneficial baobab fruit for new skin and hair care products, too.

The baobab is known as monkey bread tree, tree of life, pharmacist tree or giant of the savannah. His often bizarre shape makes it highly visible and recognisable. For some years now it emerges on the mental map because of its fruits – and rightly so. 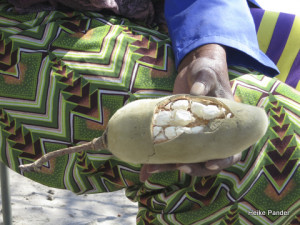 The fruit of the Baobab grows wild. It is rich in essential ingredients and is traded on the world market as a “superfruit” or “super food” – like acai berries and goji berries. The content of the fruit is striking: it contains approximately ten times as much fiber as apples, six times as much vitamin C as oranges, six times more antioxidants than blueberries, five times as much magnesium as avocados, four times as much potassium as bananas and twice as much calcium as milk and more iron than meat. This outstanding mix is joined by various B vitamins and omega fatty acids and more. The proportions of ingredients vary depending on the location of the trees. 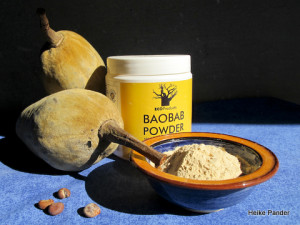 Traditionally, the Baobab is known for its beautifying and health-promoting properties. The cosmetics industry has recognized its effect on skin and hair and uses oil and powder of the fruit for a variety of cosmetic products. The seed oil is rich in essential fatty acids such as linoleic acid. This strengthens the cell membrane and the structure of the skin. The oil is pressed out in a complex process and is used in the countries of origin as skin treatment. It is said to be particularly successful in treating acne and eczema.

But thanks to the exceptional and high nutrient content baobab fruit products are on the rise in foods for example, in smoothies, granola bars or drinks. The powder of baobab fruit stimulates the metabolism and the immune system. It helps to protect the body from cell damage due to its antioxidants. The high fiber content has a positive effect on the intestinal flora. Traditional healers used it for treating stomach diseases, asthma, colds, fever, malaria, smallpox, allergies and inflammations such as arthritis.

But in countries with baobab occurrence traditional medicine knows of more beneficial resources of the baobab. Flowers, leaves, pieces of bark and roots of the trees are used, too. Baobab flower essences are said to help with osteoarthritis and arthritis. The leaves of the Baobabs are anti-inflammatory and anti-viral. They are traditionally used to treat inflammatory processes, fever, and in some areas even malaria. 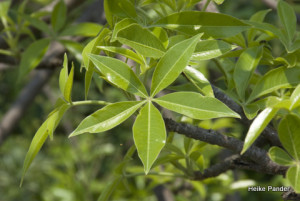 The other Side of the Coin

The growing popularity of baobab products as “health boosters” could bring negative implications. Although the increased demand for the fruits creates income, particularly for the rural poor population, it increases the pressure on baobab fruits. International interest and rising prices wake desires – which can become a problem if resources are used traditionally by many people and rights are not always clearly defined. However, the best functioning rules are of no use if the mechanisms are outruled by individual interests and corruption. Conflicts are inevitable. Existing access to trees and fruits could suddenly be denied because the rights become individualized and awarded to the highest bidder. Thus, an important food source for large parts of the population could be limited or even eliminated.

The impact of collecting large numbers of baobab fruits on the reproduction of baobabs is not clear either. The trees tend to become very old and need a long time to grow. The areas with baobab occurrence differ from each other – this makes it difficult to come up with general statements for reproduction and species conservation. For example, the number of seeds that should remain in the natural environment of the baobabs to ensure their survival is not well defined yet.

Hopefully, the experiences with other wild fruits and raw materials lead to sensitive behavior and helps to act against negative effects. Thus, the resource “Baobab” and use rights are protected and nonetheless trade remains possible with this valuable fruit on the world market.

This post is intended for general information and does not act as substitute for the advice of qualified doctors or pharmacists.

One Reply to “Baobabs – Superfruit in Trade”