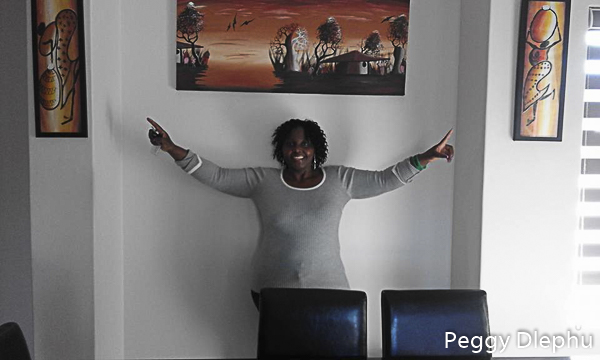 Peggy Dlephu lives and works in Knysna, South Africa. This is no secret, because the industrious artist runs her own gallery and accompanies tourists in her beautiful home on the famous Garden Route. In addition to that she is a very active user of Facebook where I discovered her beautiful Baobab paintings some time ago.

From my own travels I remember the beautiful Sagole Big Tree of the Limpopo Province. We do not waste time and get right into “baobab talk” and chat about Peggy’s work. 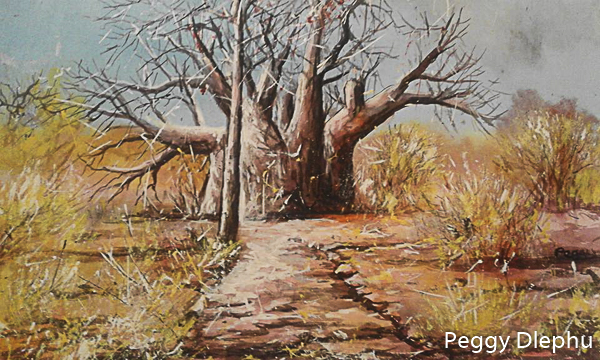 She has known Baobab from her childhood days and later from her many trips to other African countries. In Zambia she ate many Baobab fruits. The trees near the magical and world-famous Zambezi River are one of her favorite regions.

She has to say a lot on the practical side of Baobab, too. She collected Baobab fruit as a child. At home they produced a porridge from the fruit powder. Various components of the giants were used as medicine in her village. For instance, in the case of stomach ache, pieces of bark were placed in water and given to the patient to drink. This was supposed to relieve the pain.

Young leaves were used like vegetables in a relish and eaten with maize pulp. Headaches were treated with older and thus somewhat harder leaves. They were soaked in water and the patient drank the liquid. The smoke of burning leaves was said to help against headaches, too. 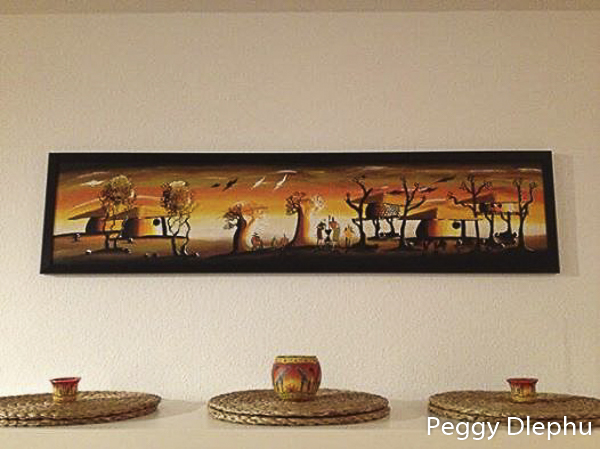 She liked the powder of the fruit. It has a slightly sour but nevertheless pleasant taste and was traditionally used to help regulate high blood pressure. It seems that all parts of the Baobab had some form of traditional use. Even the roots – they were boiled in water and cooled and drunken to treat diabetes.

Baobab – the Largest Tree in Africa

I want to find out from Peggy why Baobab is special and she says “Baobab is the largest tree we have in Africa.” Naturally, it can only be found in Africa. Other Baobab species grow in Australia and Madagascar.

In addition, the trees are so large and sometimes hollow inside that people have begun to use them as rooms to live in – “which is quite cool, because the trees are made of water mostly,” Peggy says, referring to the trees’ high water content. The biggest enemies of Baobabs are droughts and lightning.

As a child she enjoyed to paint. Her paintings are vibrant, lively and colorful. By painting she recalls her memories of life in an African village. 15 years ago she started to show her work to the public. 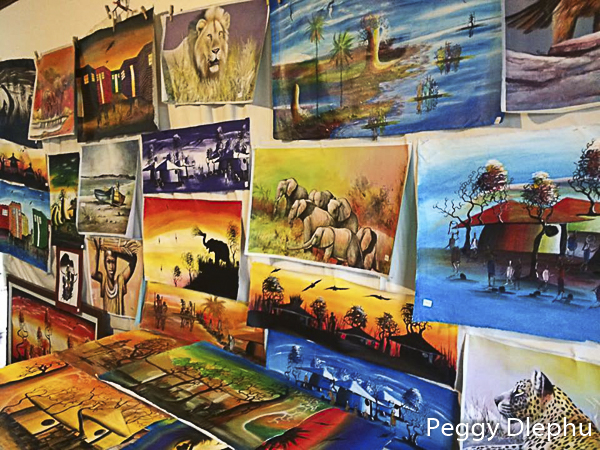 About the materials she uses she says: “when I started painting, I used acrylic paints on paper, and as the years went by, I realized it is better for me to use acrylic paints on canvas.” A pragmatic argument, given the fact that the color works better on canvas – which is important for her international customers in terms of getting the paintings home.

But she does not want to restrict herself to express her cultural heritage on canvas only. Some time ago, she went “back to school” to become a professional tour guide. In her opinion this helps her to transport a more holistic picture of Africa for her visitors. Her guests get a chance to become more aware of ‘African life and cultures’.

In the end, she tells me that the Baobab is also called the “Lucky Tree”. If you hang paintings with them on the walls at home, all fighting ends – there will be happiness and luck. This is definitely worth giving it a try… 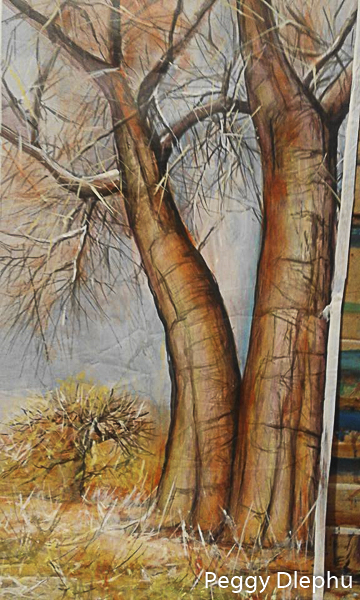 2 Replies to “Baobab, the Lucky Tree”