“Baobab is this prehistoric sacred life giving tree and it is truly unique. The tree is a highly adapted species to survive in the savannah and the fruit is part of that adaptation. There is nothing else quite like it. It has such a great potential and possibility for rural Africa – for the communities. There is no such thing as a baobab plantation – all these trees are family owned and community owned. And they are already a source of life and they can be more to continue to play that role in a commercial world. And in a global commercial world these trees are a source of income and revenue for families”, says Andrew Hunt, founder of Aduna in London, UK. 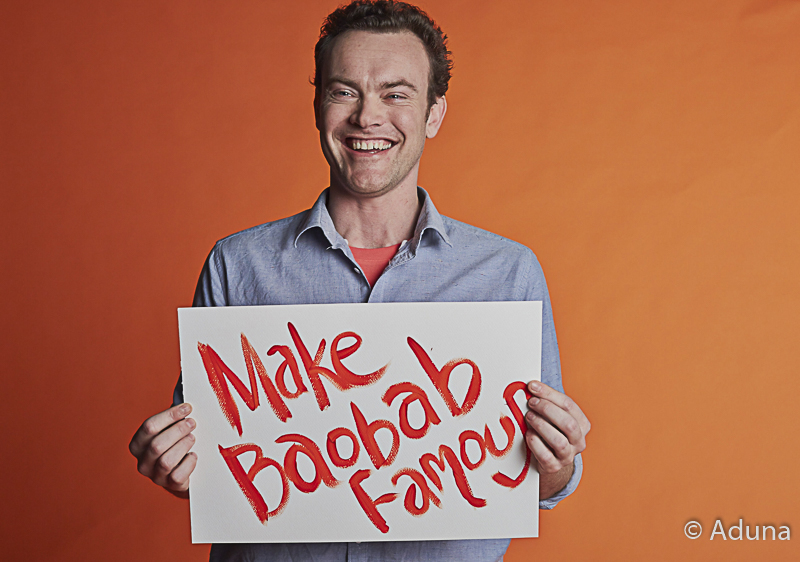 As I strolled along the many booths of innovative foods, delicacies and novelties at the Biofach in 2015 – the world’s leading trade fair for organic food – I stopped in my tracks. “make baobab famous” I read on a bright sign at one of the stands. Naturally, I went there to investigate – clearly, I’d love to make that baobab famous. But maybe not exactly for the same reasons as the people in front of me. I ran into Andrew Hunt for the first time. He did not have much time to get into more detail about his mission and why he thought baobab should be well known far beyond the reaches of its place of origin. Many people queued up that day and he had to talk a lot. I decided to follow up on this mission later on.

I found that Aduna did invest a lot in marketing campaigns and word spread about the baobab. I was impressed that the company made it as finalists into the famous “VOOM” known as well as “Pitch to Rich” – a competition for innovative businesses in the UK launched by Richard Branson. The same year, Aduna won the Social Impact Investment of the Year from the UK Business Angels Association. 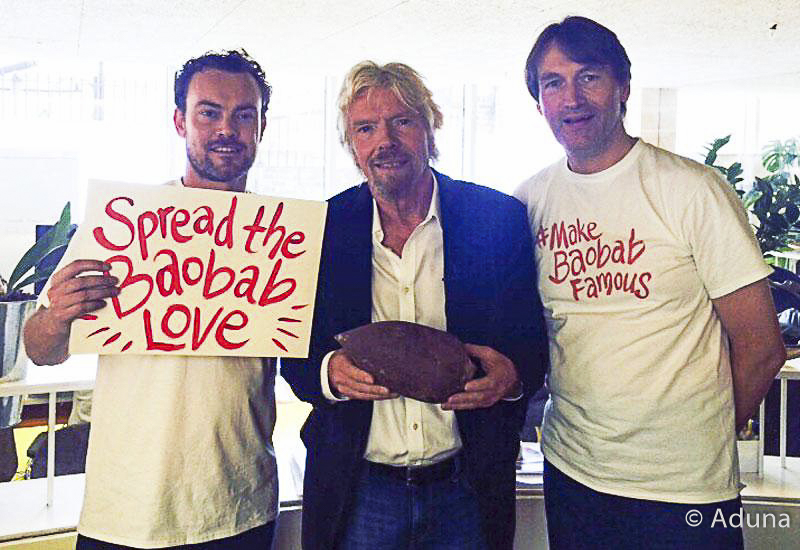 A while ago Andrew was ready for an interview with me. I was interested to find out what motivated him to start his business with baobab – of all things – just to learn that it was a combination of circumstances that finally led to selling baobab in the UK.

Through a Difficult Time

A few years back the entrepreneur started his career in the advertising industry in London for a multi-national company. Promoting products he “either did not care about or actively disagreed with – like frozen meals” did not satisfy him and together with other factors led him into an existential crisis at the age of 24 – he was diagnosed clinically depressed. “Nothing I tried in my desperation made a difference”, Andrew recalls.

A friend of the family offered him a job to volunteer his marketing skills to projects in the Gambia. He had never been to Sub-Saharan Africa before and he “wasn’t really interested in going. Fortunately my friends and family put me on the aeroplane.” He arrived in the ‘Smiling coast of Africa’ as Gambia is called as well. An extraordinary thing happened to him: “just three weeks after arriving I came back to life and I stayed for three and a half years working with small scale producers with fruits and vegetables”. 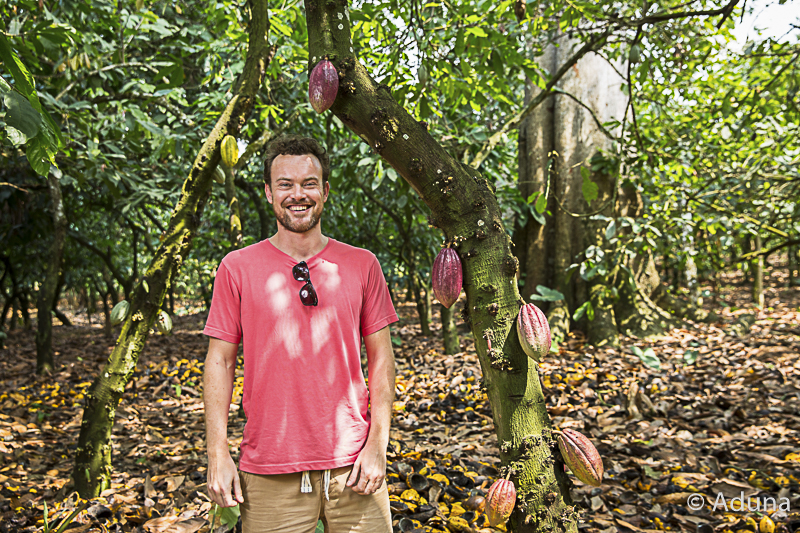 The fruit of the tree entered his life as a delicacy. His main focus were fresh produce fruit and vegetables in Gambia and baobab was not what he was dealing with but “something I enjoyed personally”. He lived close to the beach and found a lot of fruit shacks where they served baobab juice. The juice is well accepted in the country and served at naming ceremonies, weddings and family events. Andrew remembers “if you don’t have baobab juice ready you’d be frowned upon”.

His Senegalese “Mom” who looked after him while he lived in Gambia made baobab juice for him regularly. He mixed the dry powder into his protein smoothies and “baobab became my favourite drink before I had even seen the tree and that is how I got into it”. He is one of the few people I know who tasted the fruit long before they saw the trees. Usually it is the other way round – but with baobab on its way of becoming a super fruit that might change in future. Andrew saw his first baobab in the Gambia. His favourite tree grows in Njawara where he worked closely with the community on different projects. “When I think of baobab that is where it takes me back to”, he says.

Baobabs are amazing trees and Andrew was intrigued by their appearance. They look prehistoric and to him “a little bit scary” because of their demeanour with the gnarled bark at the trunk and spiky dry branches – all in all they provide a striking silhouette. Anyway, he concludes “the more you learn about them you realize that they are not scary – they are friendly.”

Years later in the UK he developed the idea to do business with baobab. “I did my MBA because I was interested to see how we could scale up the impact we were having with our activities in the Gambia and make it sustainable”, he says. He was convinced of his approach because he saw the direct impact the money from doing business had for the people involved. First he had looked into Mango, then baobab came to his mind.

His idea gathered momentum and took him to Senegal where he worked with the Baobab Fruit Company. At that time, the company was the first to process and export the powder from Africa professionally. He learned about the nutritional values of the fruit and he “thought it is an extraordinary chance”. He stayed with the company for six months and did his ‘baobab apprenticeship’.

Back in London he met his co-founder Nick Slater who was investigating the same idea and had started to explor opportunities independently. They started brainstorming together on “how to take this fruit and scale it up to a billion dollar industry for Africa” and this finally led to creating Aduna. 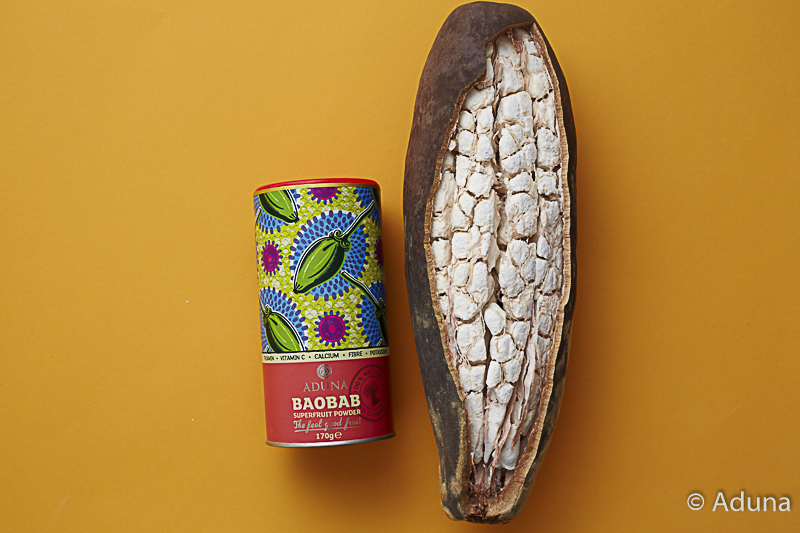 At that time baobab had its novel food status in the European Union and could be imported legally. But no progress in terms of market increase could be seen. The market for the fruit did not grow automatically. Andrew and Nick diagnosed a “vicious circle of obscurity” as they called it. Consumers did not know what baobab was – “there was zero consumer awareness” as Andrew remembers and little or no investment in product development either. To Andrew “it did not make sense to produce a product saying ‘baobab’ on it because nobody knew what it was”. Aduna took up the challenge and invested in education and awareness building which to him “was the role we realized. Our business model is about demand creation. There is no demand for products that no one has ever heard of.” 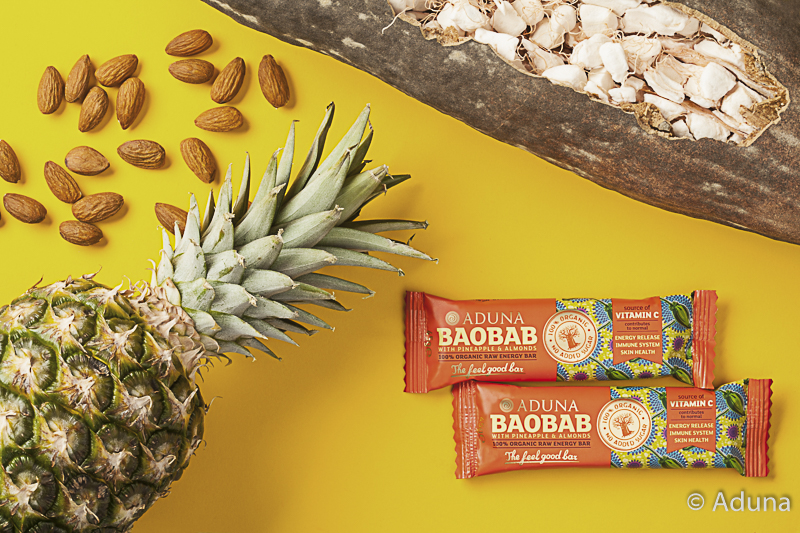 Meanwhile the company has developed a product range with baobab fruit powder and due to various factors the demand in Europe and internationally increases. As I can see at the Biofach, more and more products with baobab as an ingredient are available. Scientists at the University of Rhein-Waal counted more than 340 products compared to 2010 where “you could count the products and put them on one power point slide”, as Andrew recalls and he continues “but we are still only scratching surface and the job is not done until we see Snickers with baobab”. That is quite a mission to follow.