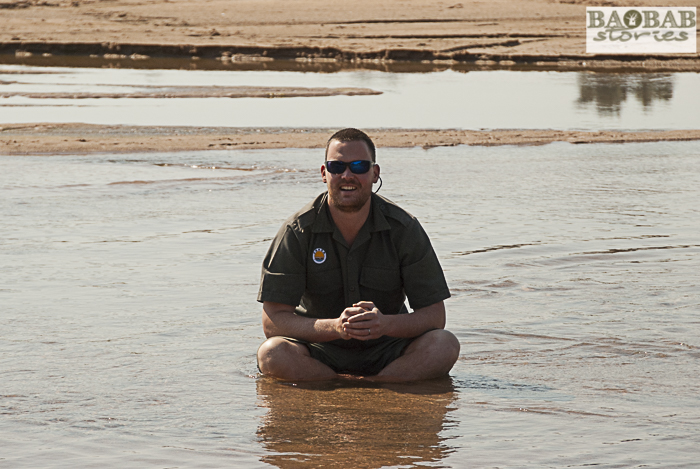 “One of the things that fascinate me about baobabs is that they have got some elephant protection. Any other tree that is wounded by elephant can repair the damage only from the sides of the wound. The baobab regenerates the whole wound at the same time – it does not have to work from the outsides in. That makes them very successful as a tree“, says Jasper Visser. 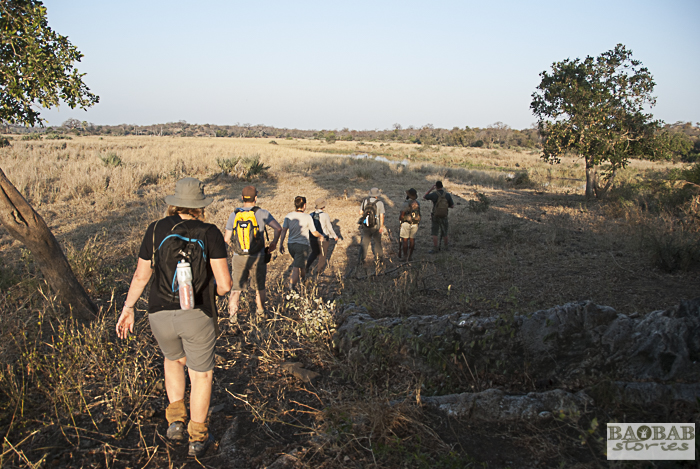 While attending one of the Eco Quest courses at the EcoTraining camp in the Makuleke Concession in South Africa I met the enthusiastic field guide instructor. The choice of his profession and passion does not surprise me as he explains: “My dad is a professor in ecology and sustainable tourism and introduced me to the topic at an early age“. 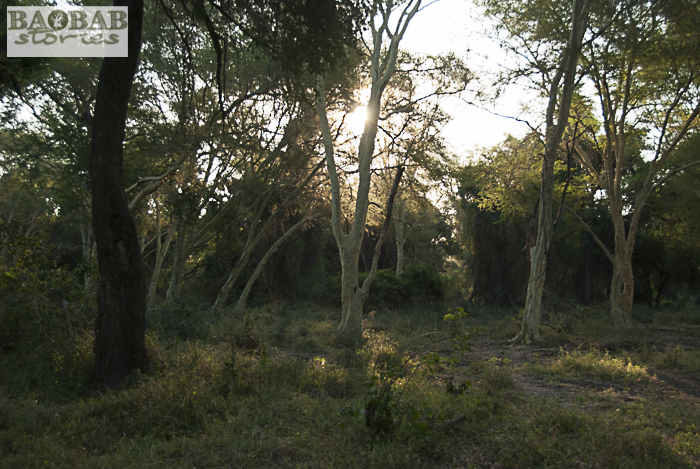 He loves the African bush and prefers to explore it on foot which becomes clear quickly as he takes us for an incredible walk to the Makuleke fever tree forest. He is „interested in the smaller things of nature“, and he adds that those can clearly be seen best while on foot. Which I can confirm after several days of walking with him along the numerous animal trails of Makuleke. 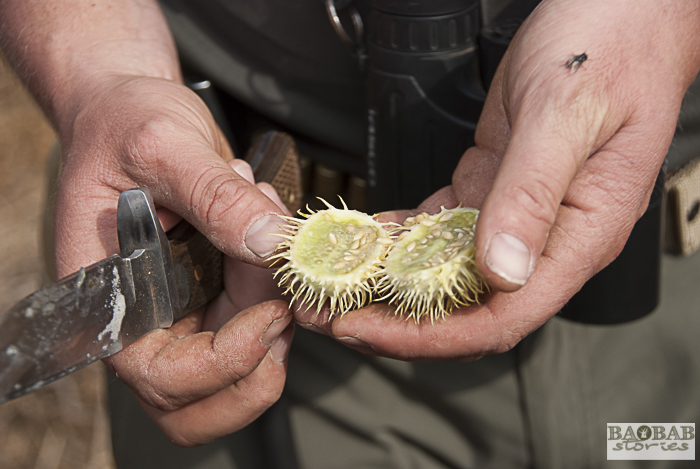 I have particularly wonderful memories of one of our walks towards a hill covered with beautiful baobabs. It was late in the afternoon and the sun was setting behind the trees. We were hiking through grass as high as a man in the direction of a natural dam where we knew we could find hippos. Jasper did not seem to get tired sharing all he knew about the numerous birds coming to the pool. We waited in vain for furry creatures on this occasion and the hippos did not show either. On our way back we walked into a herd of buffalo. Jasper took us around the herd in a wide angle to give the animals and us some space until we were at level with them. 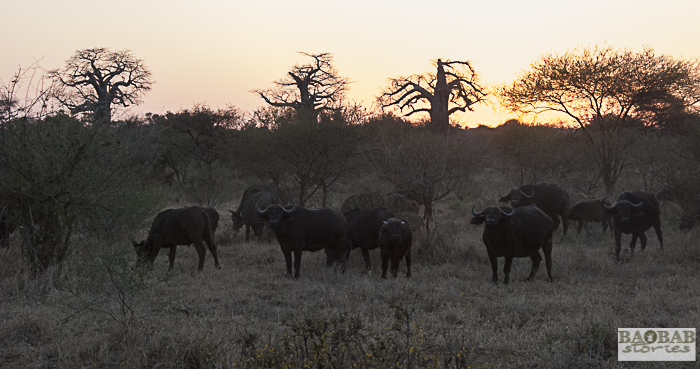 Jasper told us to sit down. At this point I quietly wondered if this was the best thing to do. But he seemed confident – but, mind you, he carried the gun… The herd had noticed us. Each individual had lined up – facing us directly. Intimidating. The head armour of the bulls looked particularly scary. We were quiet and watched for a while. The buffaloes stared at us and we stared back. Despite the fact that we were watching some of the most dangerous animals the scenery was peaceful and I felt safe. It was getting dark quickly and we moved on. The buffaloes peered after us until we were gone – only then did they continue to walk towards the dam to quench their thirst. 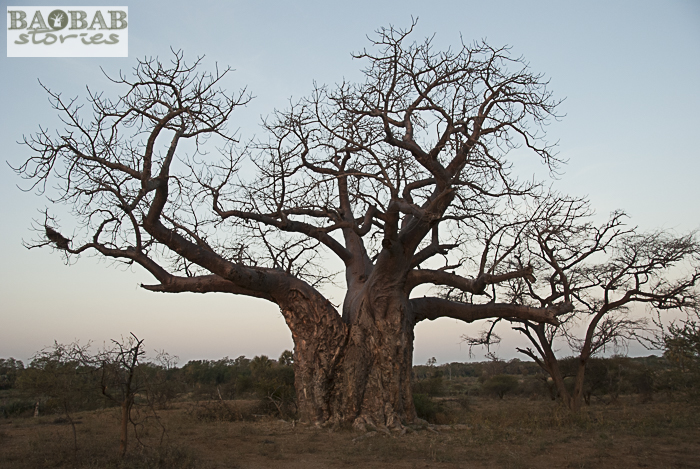 Botany fan for a good reason

Jasper sports a special interest in botany: „I like it a lot because it is something you can always talk about on your walks particularly if you don‘t find tracks or big animals“, he says. He saw his first baobab during a visit to Kruger National Park with his father. „I was wondering what these huge trees were amidst all these medium sized ones – that was about 15 years ago“, he recalls. The family referred to baobabs as the upside down trees as many other people do. Jasper explains „because it looks as if the roots of it grow on top – that makes it a bit of an odd looking tree“. 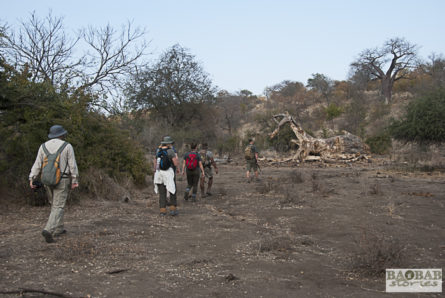 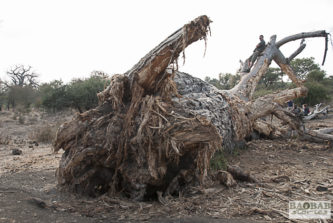 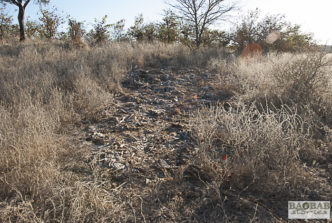 We pass quite some beautiful baobab specimens on our walks – various shapes and sizes and in different age groups. On one occasion he leads us to a giant that had recently died. Not nice but part of nature. It had toppled to the ground and had been hit quite severely by elephants who love the soft wood and fibres. The reason why it had died remained unclear – I was told that it might have been de-rooted and washed down the hill during a severe flooding. While the others make themselves comfortable on the remains I take photographs of what is left of the tree. On another occasion we pass a spot where the only reminder of a baobab was a round depression on the ground with a bit of fibrous material left. Another icon of the savannah had died some time ago and most of it’s traces were gone.

While studying to become a trails guide he brushed up his knowledge on baobab because he needed the information to „teach guests about the trees while I am out taking them for walks“. Jasper is intrigued by the fruit: „When I started guiding I noticed that the fruit of baobabs are special – they are velvety on the outside and very different from any other fruit I know. The fruit is soft by the touch but underneath that layer they still have got a hard shell“. 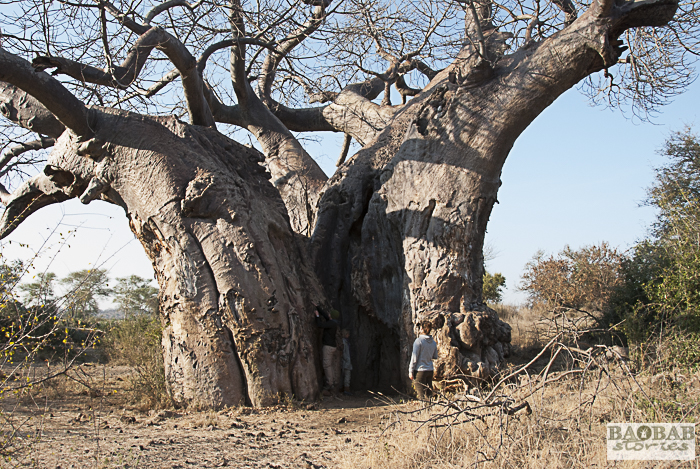 The field guide has worked in the industry for more than ten years and he found that „as soon as you start seeing baobab you will also start picking up elephant tracks because the elephants seem to like staying in the vicinity of the trees.“ Elephants love baobab fruit – as we notice while walking: the ground around the trees is cleared of all fruit – not even a fragment of a shell is left. Jasper assumes that elephants must enjoy the shade of baobabs: „a big elephant can‘t just stay under any tree. I think the baobab is one of the only trees that give it full shade,“ and he continues to say „I find it amazing that elephants can de-root and push over almost every tree but with the baobab they do not even try.“ They suffice to take out pieces from the bark. 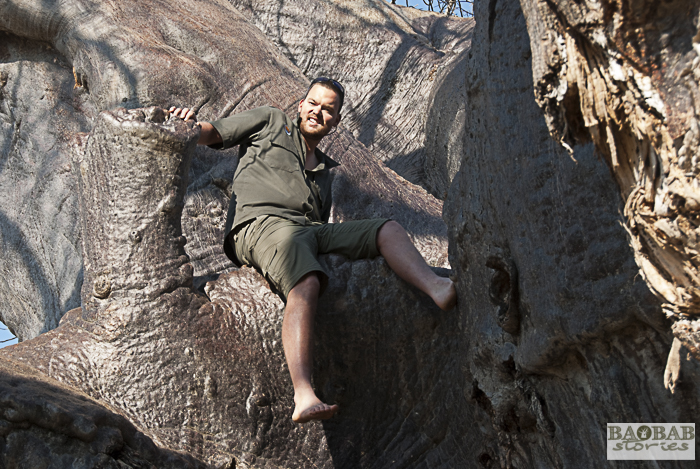 Quentin Swanevelder, Jasper’s colleague, joins our baobab chat and allows us a glimpse at his baobab experience: he climbed up one of the big baobabs in the Makuleke Concession and found a big hole which he explored curiously. The tree hosted a natural bee hive which Quentin had not seen – he got stung. Bees like to set up their hives in old baobabs because they can find lots of space and cavities. Getting stung surely was not a pleasant experience but probably not as bad as one of the young back-up guides learned during his effort of climbing a baobab: he fell off the tree and broke his leg. Baobab bark can be very smooth and as a result of that quite slippery – if climbing is done with shoes. Climbing barefooted might be a better choice and it might even be nicer and more pleasant for the tree. In some countries climbing baobabs is not allowed because it can damage the bark. 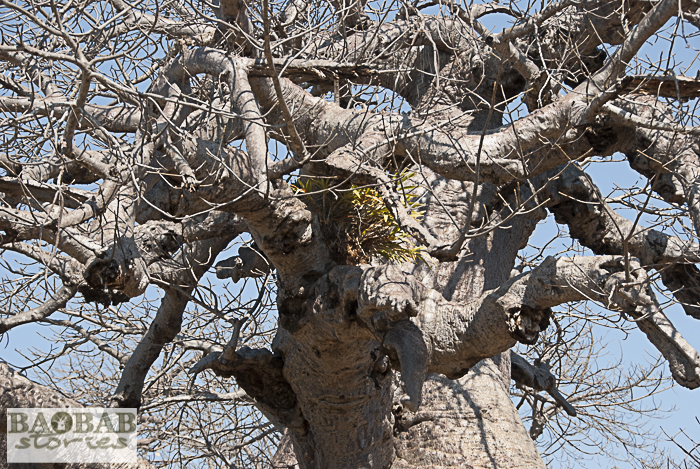 As the conversation moves on we talk about the ecosystem „baobab“: the trees can host numerous other plants and animals and Jasper just names a few: „King Fishers and woodpeckers live in the natural cavities of the baobab trunk and branches. Buffalo weavers reside on the massive thick branches and build their nests there. At least ten different bird species make use of the baobab which is quite amazing“. Apart from birds, furry creatures like the baobab, too: bush babies, monkeys and leopard can be found on them. The latter prefer to rest on the huge branches. They make wonderful platforms for naps and provide a great overview of the area. We both agree that it would be fabulous to spot a Leopard taking a nap on one of the baobab‘s huge branches. 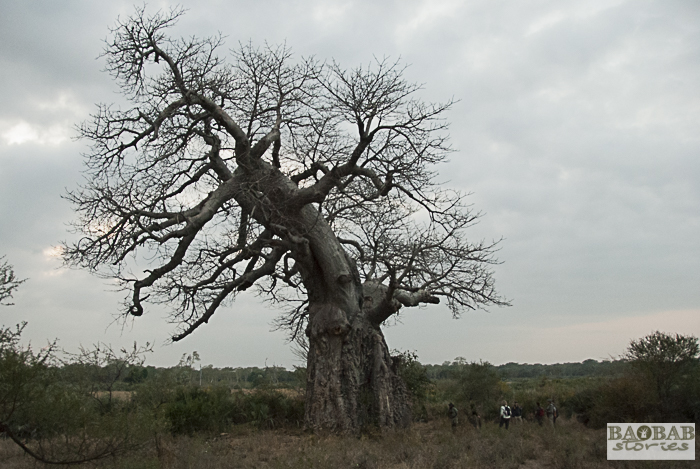 8 Replies to “Baobabs are Elephant Proof”