… your own! If you are a proud owner of Baobabs on your window sill, the balcony or patio, you are in the lucky position to produce seedlings or saplings of Baobabs yourself. 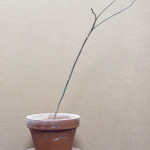 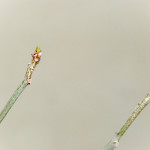 At a very young age Baobabs put a lot of energy in a long and thin single shoot which they seem to drive „straight to heaven“. The shoot can be up to one meter or even more per growing season – even if grown in a pot. A little crown with multiple leaves forms on top of the shoot. The young baobab does not resemble its older relatives in the wild. Baobabs develop their bulbous form once they have reached a certain age. In younger years they need to get tall as quickly as possible. This helps them to avoid being eaten by goats, cattle or antelopes since their shoots taste delicious to the animals.

The energy a little Baobab seedling shoots into its stem in spring can become a real challenge for a normally sized apartment or balcony. But with a skillful pruning you can keep the Baobab to “room size”. Although pruning sounds a bit harsh – it will support the expansion of the potted Baobab into its typical round and gnarled form.

Baobabs tend to lose their leaves usually in October/November each year. The trees announce the coming event by slowly turning their leaves yellow. This is a good time to prune a Baobab. It is done best before all leaves have dropped. The leaves left on the seedlings help them to produce new roots. But you do not have to wait for fall – Baobabs can be pruned year round.

Put the cut pieces into a bottle of water. With a little luck you can observe white dots above the section point pushing their way through the top layer of bark a few days later. As an alternative you could put the seedlings into a container with wet sand. The sand should be moist but not soaking wet. Nevertheless, growing roots requires patience since the process may require several weeks. If you try the water-approach – exchange it every now and then.

Once the roots are long and strong enough, plant the seedling into a pot. Clay pots suit the needs of Baobabs best. As a first layer put pebbles into the pot for better drainage. On top oft hat comes a thick layer of cactus soil mixed with sand (1/3rd should be sand). Make sure that you take riverine sand and not sand from the sea – it might carry salt which the Baobabs do not like at all at their roots. This soil mixture will allow for good drainage. Since Baobabs are very frugal beings they should not be over-fertilized.

It may take quite some time for the seedling to show the first leaves. One of the seedlings I generated in December showed some first green leaf tips in May of the following year.