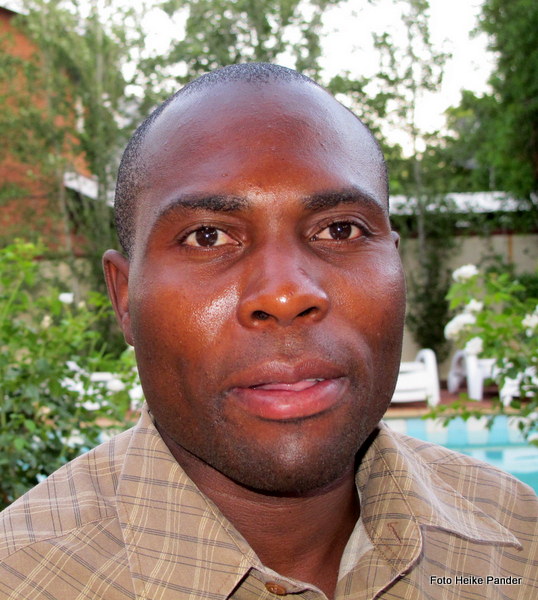 Levison Gombachika has travelled a long way from home. He comes from Chirimba, a township of Blantyre in Malawi. I meet him in Pretoria, South Africa, where he works as a manager in a guesthouse. He knows Baobabs and their fruit very well, since many of them grow in the region where he comes from – particularly around Lake Malawi and the Shire River area.

When he was visiting Malawi the last time he went to a local market. There he saw people who had produced juice from Baobab powder and sold it. He tasted the juice and found it quite tasty. He inquired about the recipe but the women on the market did not want to reveal their secret of how to make the Baobab fruit juice.

He remembers an easy recipe he particularly liked as a child because it tasted like a very good dessert to him. Levison took Baobab powder, mixed it with milk and added a little bit of sugar. The interesting flavour is a mixture of light sour and sweet because Baobab tends to taste like citrus fruit.

A very smart way in terms of reducing work load and to make a cool drink is to take the fruit powder including seeds directly from the fruit and dissolve it in milk. The seeds float in the milk and can be taken out easily. The beverage has the consistency of yogurt and tastes slightly sour.

A delicious breakfast porridge can be prepared with Baobab fruit powder as well. Take the  porridge flakes and soak them in dissolved Baobab powder (either in milk or water), add some sugar and boil it.

But he remembers other uses of Baobab as well. Mats or ropes were made out of Baobab bark. The mats were used for sleeping. The ropes are very strong and well known for their tensile strength. Levison adds that Baobabs form a new layer of bark after it was removed.

The generation of his grandfather used parts of Baobab to treat diseases. In the morning a piece of bark was taken and soaked in water. In the afternoon the patient could be treated with it.

He finds it very interesting to hear that interest and attention for Baobab fruit and oil on the international market is growing because of their healthy contents and that both are even exported from Malawi. He saw a documentary on television about Marula the other day and how oil from the seeds is produced. He was reminded that plenty of Marula trees grow around Chirima, too.

The fruit are collected and eaten by children. Commercial use does not take place yet he says. The situation of Baobab fruit seems very similar. He sees a great potential for trade with both fruit for himself and others.