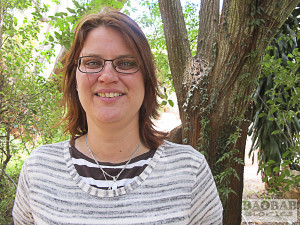 I met Katinka Musavaya during my field trip to Fairtrade certified baobab producers in Harare, Zimbabwe. She works for Organic Africa and is responsible for baobab certification in terms of organic and Fairtrade. Originally, she comes from Germany but has spent five years as a child with her parents in Zimbabwe.

Even after returning to Germany, she has maintained contact. She spent a year in Zimbabwe after high school to think about an appropriate career path. Later on, she met her husband in Zimbabwe. After she finished her studies in agriculture with the University in Hohenheim, she moved to Harare with her family and has since lived there.

For her first employer she worked as an office assistant. Her major assignments were reporting and finance but she was more interested in monitoring, evaluation and certification of products. She as studied certification standards and is now responsible for the internal control system of the company.

Baobab fruits grow on trees and are referred to as wild collections. Baobabs still do not grow on plantations. The fruit fall from the trees as soon as they are ripe. Collectors pick them up, companies organize transport to the cities. The baobab collectors are organized into cooperatives these days as a requirement of various certifications.

Organic – proving what has not been done

As a seller of organic products one has to prove what does not happen to the fruit. For example, no pesticides may be used on the products. The baobab fruit often qualify as organic naturally. The crux for the organic certification is the storage of Baobab fruit. They cannot be stored in the same location with other fruits from conventional production.

At the beginning of trade with baobab in the rural areas a lot of educational input was provided. The fruit collectors needed to understand the necessity of strict separation between conventional and organic production. All collectors were trained in methods of “sustainable harvesting” as well and all received contracts.

Extension executives in rural areas ensure that the collectors receive updates on latest information. Their duties include buying the fruit and organizing the transport to cities.

The company carries out a risk analysis every year. This includes estimating the risk of mixing organic fruit with conventional production and an assessment of possible sources of contamination of the fruit powder.

Baobab powder is a natural product that does not require further processing. Once the fruit is ripe it falls off the tree and is picked up by collectors. The fruit powder is taken out of the fruit shell. It usually does not need further treatment and can be packaged directly for marketing. Therefore high hygiene standards are important in order to avoid contamination.

Once a year an internal inspection tales place. The areas and the collectors are visited, factories and storage facilities inspected. Also once a year the organic certifier conducts an external evaluation. They scrutinize the internal control system and take samples in the field. Certification is granted for the year to come.

In the course of our conversation I asked Katinka for a story about Baobab from her childhood. She responded that she started eating broccoli only when her parents told her that the vegetable was a little baobab. A similarity in the shape is recognizable, and as a child she has “swallowed” her parents story.

In the end she shares another story with me which she has heard from her husband. It is about the odd looks of Baobab.

The Creation of Baobab – a Shona Story

When god created earth, baobab was one of the first creatrures that came into being. It was a nice lush tree. But it was naughty and very vocal. The tree would comment on the look of Zebra „it looks so ugly – why did you do that?“. The baobab continued to an extent that the creator ripped it out and turned it upside down.

6 Replies to “Baobab Certification in Zimbabwe”