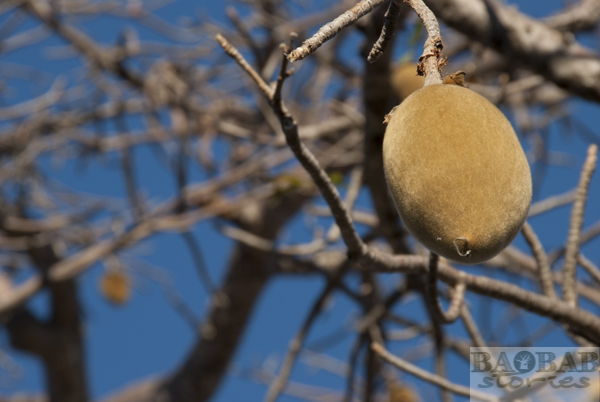 Baobab seeds are embedded in the cream-colored fruit pulp and the red-brown fibers in the hard pericarp. The outer shell has to be cracked open manually first in oder to collect pulp, fibers and seeds. In a next step the seeds are sieved, washed and left to dry in the sun.

The seed coat is approximately 0.1 millimeters thick and not easy to peel to get to the kernel. Traditionally, seeds were treated and used differently depending on the region. Seeds can be consumed as a whole or the inner kernel only. They can remain raw or be roasted, dried in the sun, boiled for several hours, fermented, or be ground. 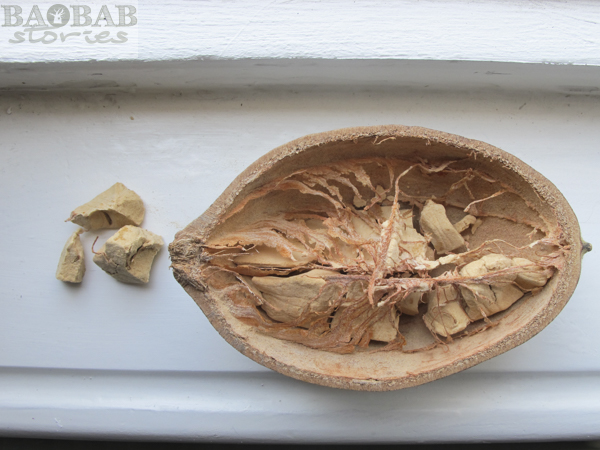 The seeds in the seed coat are highly nutritious and have a slightly almond-like taste. They are rich in oils and fats, vitamins (A, E), high-quality proteins, calcium, magnesium, phosphorus, potassium and other minerals, dietary fiber, saturated (30%) and unsaturated (70%) fatty acids and amino acids such as lysine. 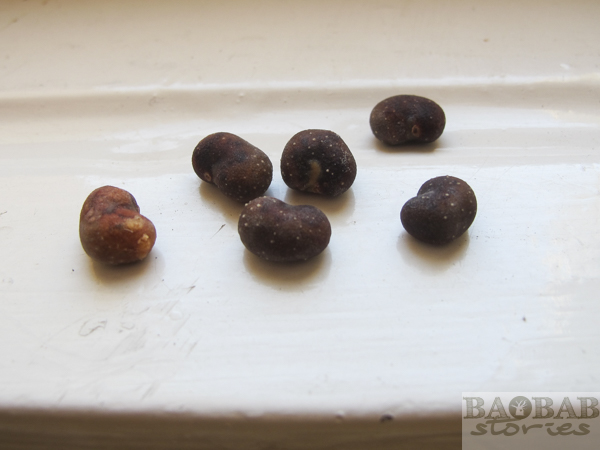 If some fruit pulp remains on the seeds, they are appreciated particularly by children. The drops have a slightly sour taste similar to that of citrus fruit.

In order to get to the kernel the seeds are cooked or roasted and then crushed. Roasted seeds can be eaten like peanuts. As a coffee substitute whole seeds were roasted, ground and brewed with hot water. The powder can be used as seasoning for soups or other dishes.

In traditional medicine, the seeds were used to treat various diseases. Ground seeds were mixed into a paste and used to treat gum problems and diseased teeth. The Wakamba in Kenya used a paste to treat aching joints. In the eastern Zambezi region in Namibia (formerly the Caprivi) very thin and malnourished people were treated with high calorie seed kernels. For that the seeds were crushed, mixed with herbs and cooked to a decoction. The consumption was supposed to result in weight gain.

In South Africa powdered seeds were used to treat children with hiccups. In Central Africa diarrhea was cured with a combination of extracts from the seeds and fruit pulp. Seeds were also helpful in treating stomach and kidney problems.

Baobab Seed – an Antidote to Strophanthus

Hunters used extracts from baobab seeds (or bark extracts) as antidote to neutralise the poisonous Stophanthus applied to arrowheads for hunting. Strohpantus has an impact on the nervous system of the prey taken. The meat of animals killed with the poison could have a similar effect on humans consuming it.

In former times people burned fruit shells, seeds and red fibers. The developing smoke kept away flies. From the residues potash was obtained. It was used as a fertilizer or as an additive for soap.

The oil extracted from baobab seeds becomes more and more popular on the international market for its values in skin and hair care. In South Africa the oil is cold pressed out of the seeds by means of an oil press. It only needs to be filtered and bottled. Additional processing steps or additives are not necessary – the oil remains naturally pure.

The precious oil can be applied to skin directly or used in creams, lotions, masks and baths. It has a moisturizing effect to the skin, absorbs quickly and relieves dry skin. Due to its comedogenic properties it has a positive effect on acne, psoriasis and eczema. Pregnant women use the oil to keep the skin smooth and to protect it from stretch marks. Baobab oil is used to make soap. In Africa, people use the oil for cooking. On the European market it is approved as ingredient for cosmetics but not for food consumption yet.

After the oil is pressed out of the seeds the remaining press cake can be used as animal feed for cattle, sheep and goats. The pressing residues have a high nutritional value – similar to that of legumes.

Baobabs in Need of Care

Although baobabs do not grow on plantations – nevertheless seedlings are grown to be planted near houses and settlements in Africa. During their first three years they need sufficient water and must be protected from hungry cattle, goats and sheep. Only when they grow three meters and higher, they are safe from browsing animals. People need to have a lot of patience to see the first harvest of their baobabs – it takes up to 20 or 25 years for baobabs to bear their first fruit – depending on where they grow.

Baobabs are suitable as bonsai in flower pots. However, the cultivation of seeds requires a lot of patience, too. In the wild germination of the seeds is less than 20% due to the hard shell. But this can be helped. The hard shells can be scratched or sawn open. Cracking the shell gently with secateurs serves the purpose as well. The opened seeds need to be soaked in warm water. Instead of cutting or cracking them, the seeds might as well be boiled in hot water for approximately 5 minutes – which is said to serve the same effect. In nature, the hard shell helps the seeds to keep their ability to germinate for a long time. They can sprout even after years of lying dormant in th soil. Older seeds seem to germinate faster than younger seeds.