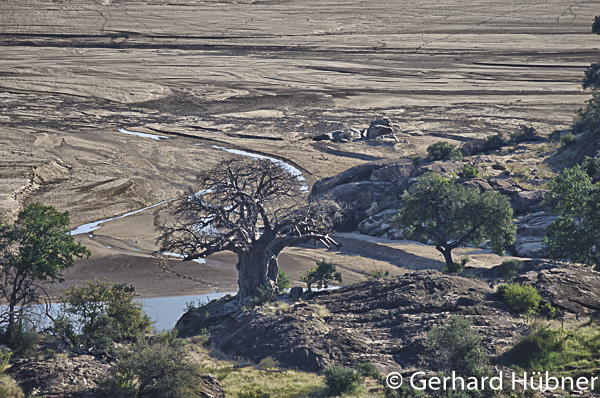 “Baobabs have somehow become our favorite trees in Africa, they are simply spectacular,” says Doreen Gericke about the fascinating giants. I met her and her husband Gerhard Huebner in the “Bergisches Land” in Germany far away from their home Berlin. 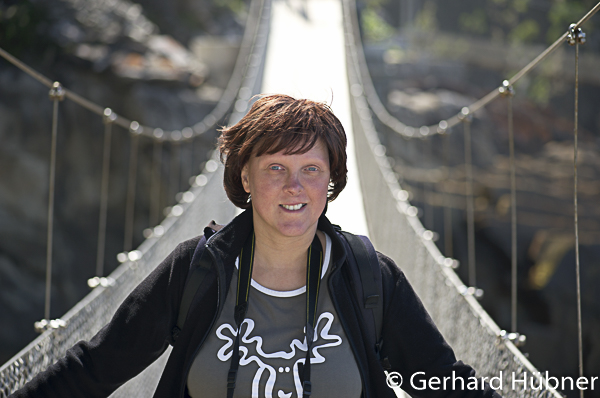 At that time I was invited to attend a “Pfingst-Braai” – a special barbecue in Engelskirchen. Namibia fans from near and far gather to participate at the meeting for an extended exchange of travel plans and insider information about the southern African region. Certainly the two from Berlin have to be there.

After my photo presentation featuring one of my journeys to Baobab country we got into a little conversation. The little Baobab I brought to the presentation with me for visualization purposes seemed to have inspired their interest. Later on they bought their own baobab sapling originating from Senegal. In the meantime it sprouted leaves and looks very healthy in their office. 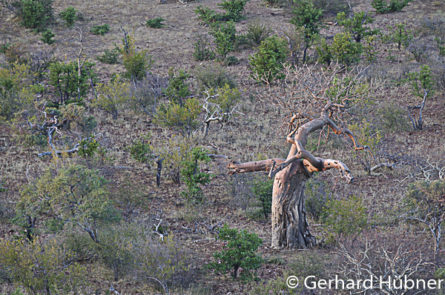 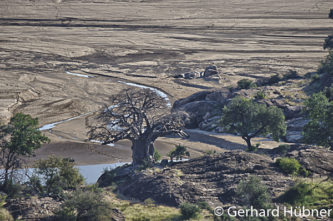 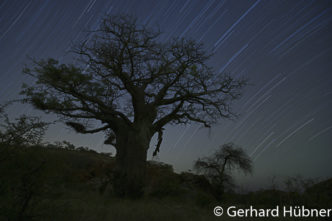 They saw their first “wild” Baobabs some years ago in the north of South Africa during one of their journeys. The landscape in Mapungubwe National Park with some outstanding baobabs particularly impressed them. And they went to see the Baobabs in the north of the Kruger National Park. However, real enthusiasm for the trees becomes evident as the two start talking about the trees they saw in Madagascar.

Doreen and Gerhard spent almost four weeks on the island in 2014. Gerhard called it the “Madagascar route for beginners” for tourists. The road conditions are very difficult as is orientating oneself since there are hardly any reliable maps or signs around, as Gerhard tells me.

The two hired a guide who prepared the tour and accompanied them throughout their trip. The couple landed in Antananarivo, the capital city of Madagascar and from there headed to the east to see their first destinations.

They spent most of their travel time in the central highlands. “We noticed quickly: driving alone in Madagascar as in Namibia or South Africa is not advisable,” Doreen recalls. They reached the south-western parts of Madagascar only towards the end of their holidays. From Toliara they drove to the small village of Ifaty, which is located right by the sea. 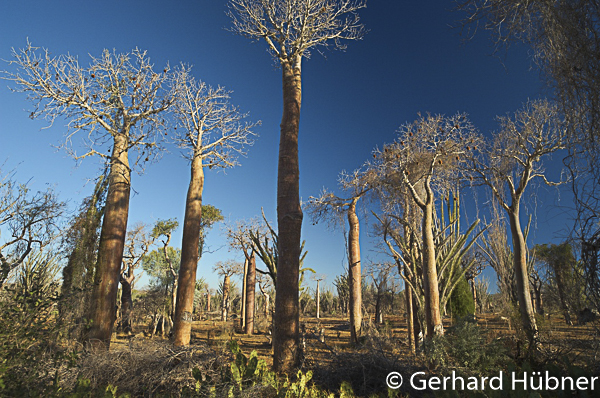 Near the end of the village a small nature reserve named “mother of the forest” resides. Its Madagascan name reads Reniala. The private reserve protects the remaining spots of primary forest in the area. It is also known as the “thorny” or “spiny” forest of Ifaty.

Originally they wanted to see Sifaka, a species of lemurs living there. An ox-cart took them and their guide into the forest. However not deep enough to see the Sifakas. The deeper they got into the reserve the more complicated it became for them to progress.

Sifakas feed on Didieraceae, well-fortified and thorny plants. Sifakas seem to move effortlessly on the plants. Even when landing after a jump, they do not hurt themselves on the long thorns. 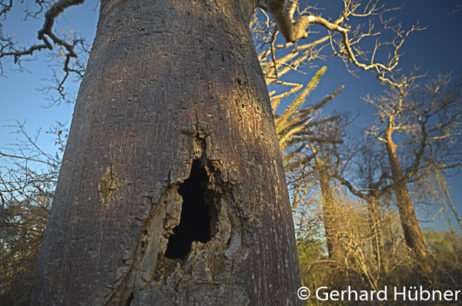 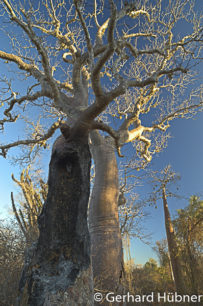 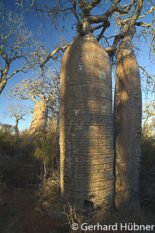 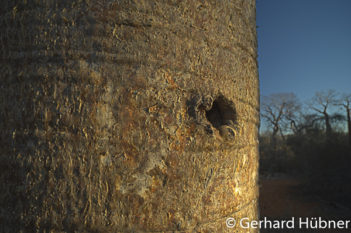 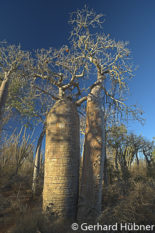 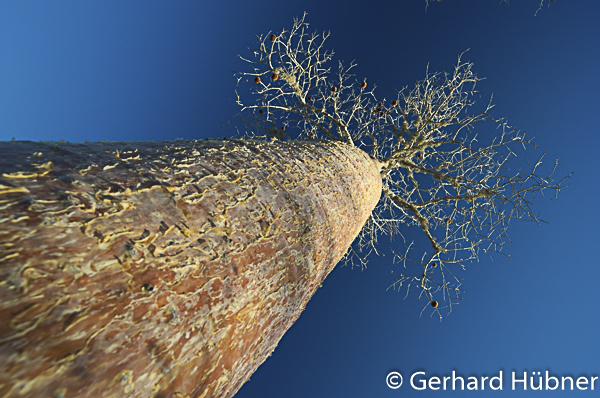 The animal friends do not manage to catch a glimpse at the lemurs. Instead they saw beautiful old Baobabs, known in this region of Madagascar as Adansonia rubrostipa.

Seven Species of Baobabs in Madagascar

They are similar to the baobabs of the genus Adansonia digitata, which also occurs in Madagascar. However, they are smaller and have yellow instead of white flowers. They are also known under the name Adansonia fony.

In addition to Adansonia rubrostipa and Adansonia digitata, there are five more baobab species endemic on Madagascar:

Interestingly, the different species grow in different places on the island. Science is at odds with the origin of the Baobabs: ideas range from the trees originating on the African continent, on Madagascar, in Australia, or even in Latin America. 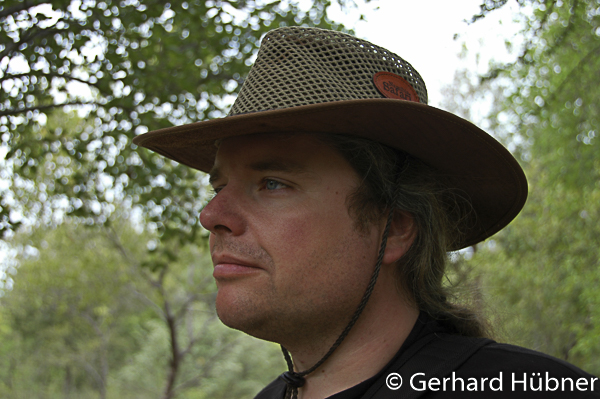 Doreen and Gerhard have brought beautiful photographs from their Madagascar journeys. Gerhard took photographs “with a normal SLR camera – nothing special,” as he describes it. He particularly seems to like the technical aspects and that sounds rather advanced in the application: every now and then and if the motive allows he works with nodal points for a very special panorama effect.

To accomplish this, one has to adjust the camera-lens design so that everything revolves around the “correct” point. This allows to “sew up” the images later at the computer. Ultimately, a program calculates the photos as desired – “but only if you have done everything right before, otherwise a kink shows in the picture,” the photographer says. The two co-authored the book “The Heart of Madagaskar” (in GERMAN) where some of their photographs can be seen. 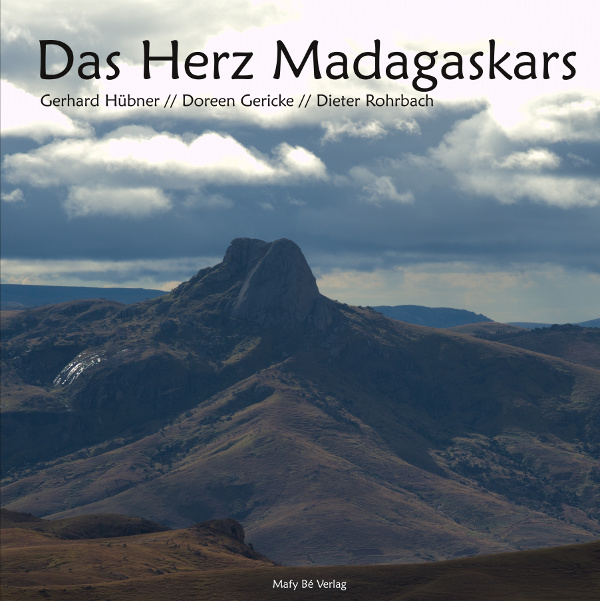 For Doreen and Gerhard, Baobabs are among their favorite trees in Africa and to them Madagascar is definitely worth more than a single trip. During their next visit they plan to see the world famous Baobab Avenue near Morondava.

4 Replies to “Baobabs in Madagascar: 7 Species”