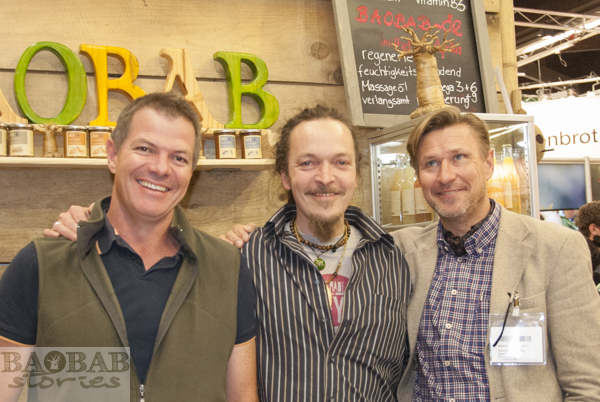 Baobab Lemonade – Not just “some soft drink” – no, it is the “champagne of soft drinks” – says Baobab pioneer Andreas Triebel proudly. He talks about his long journey from landscaping to becoming an activist in terms of fair and environmentally sustainable traded Baobab products. The results of his efforts are not only visually a treat – the Baobab refreshment is exceptionally tasty.

Andreas Triebel worked as a landscaper until he decided to make his dream come true in 1994. He jumped right into his adventure and traveled to Kenya for the first time in his life. He stayed for almost two years and discovered not only the bright sides of the country. He wanted to contribute his share to help improve the living conditions of local people – particularly that of children. While he lived in Kenya he met his wife Halima and bought a piece of land. Together they founded the non-profit organization “Baobab Family eV”. It operates a local orphanage and takes care of street children, too. The work is based on the principle of helping people to help themselves. During his first years in Kenya Triebel became a fan of Baobab. The children around him affectionately called him “papa Baobab”. Meanwhile, the couple has five children and lives in Munich.

Originally, the adventurer had planned to build a recycling company in Germany after his return from East Africa. He had already done research on the matter and had come up with designs for recycled products. In 2009, he came across inspiring information which influenced his professional decisions fundamentally and caused him to change his plans: The European Union (EU) authorized Baobab powder for imports. For Triebel this was not just a mere coincidence but rather a calling. He describes his relationship with the trees as: “Baobab – my big brother.”

Triebel works with Baobab powder and oil. He received his first powder from a supplier in Malawi. Together with his wife he experimented with the natural product. The powder or pulp is extracted from the fruit of Baobab trees. While the fruit ripens on the tree, the wet fruit pulp dries naturally inside the hard pericarp or outer shell. Once the fruit are ripe, they fall off the trees and are collected by the local population in rural areas of Africa. Thereafter, the fruit shells have to be cracked open, the fruit powder and seeds are extracted. The powder is merely sieved – solely freed from seeds and fibers. Further processing steps are not necessary. The powder is ready for use – a table spoon full of Baobab powder tastes great if dissolved in water.

In the beginning Triebel enquired about possibilities to produce a clear product because naturally Baobab powder makes the water cloudy. To accomplish a clear product gelatin is used as is known from wine production. However, since he wanted to offer his beverage purely vegan, he decided against the clearing method as he describes with his own words: “I wanted my product as sustainable and fair as possible – therefore I cannot start to market something as being vegan if it is not.” Much time and resources went into developing Triebel’s Baobab products. He even went to markets to capture feedback by means of surveys about the taste of his soft drinks from testers.

“Fairtrade and Fair Traded” is Important

The Baobab powder used in the soft drink originates from various sources: Malawi, Zimbabwe and West Africa. Triebel says it is important for him and his company that the powder is produced in a socially and environmentally sustainable way. The people involved in the fruit collection and pow-der production are meant to receive a fair price for their work and goods. The fruit powder is not traded on the world market like coffee. The price is often negotiated between the collectors of the fruit and the dealers. Some of Triebel’s suppliers are certified with the Fairtrade seal. This helps to ensure that fair remuneration is paid locally and collectors and workers work under fair working conditions. Not all suppliers can afford certification by Fairtrade and other certifiers. Inspired by official standards Triebel has developed his own definition and criteria for fair trade without un-dermining his own ethical principles. According to him it is important that he can visit his partner companies abroad in order to get firsthand information about the situation on the ground.

Baola is “Laola” – the “Champaign of Soft Drinks”

Triebel developed his “social business” brand “Baola”. On offer are Baobab soft drinks either with natural flavor or mixed with other fruit like cherry or mango. Triebel called his baobab refreshment proudly as “champagne of soft drinks” – in his opinion the product is not “just” a lemonade. Apart from the soft drinks, the brand “Baola” includes Baobab confectionery, spreads, chocolate, baobab powder baobab seeds, soaps, oil and other products. The name came to Triebel in a dream during the time of the soccer World Cup 2010. In fact, it almost sounds a bit like “Laola”.

To make it easy for his customers to locate “Baola” in stores the creative entrepreneur has developed an application where one can easily trace down Baobab shops all over Germany. Triebel founded “Baobab Social Business” where “Baola” is sold as a non-profit Limited Liability Company (Ltd.). The purpose of the company is firstly to trade fair produced products and secondly to create aware-ness on Baobab matters and fair trade in Germany. With his approach Triebel united a social enter-prise concept with innovative products. His vision: Many people shall benefit from his enterprise’s activities – without individuals taking advantage at the expense of others.

More information about the product and the work of the Baobab Social Business gGmbH see www.baobab.org