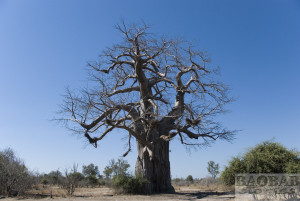 Creation of Baobab: Based on an old Shona Story:

When god created the earth, the baobab was one of the first plants that spread on the African continent. It was a nice and lush tree, stood tall and handsome like a reference point in the Savannahs providing food, fibres and medicine for many.

Although it was a beloved creature of god – there was a down side to it as well: the tree was very naughty and vocal. It liked to make its opinion heard to everyone – whether they liked it or not.

One day the baobab would comment to the creator on the look of Zebra – „it looks so ugly – why did you do that?“ Hyena and the saddle billed stork were not spared either. His „bad-mouth“ grew into a really nasty habit and every time a new being was created the tree could not hold its tongue.

Baobab stated its opinion in a manner that it could not be overheard. There was no helping it and sure enough baobab earned back what it had dished out: One day, the creator could not stand the comments any longer, lost his temper and ripped the baobab out of the soil.

Nevertheless he did not want to abandon it and leave it to die. Therefore he simply drove it into the soil upside down – its extensive roots expanding far into the sky. This is how the baobab got his current looks. His comments were never heard again.