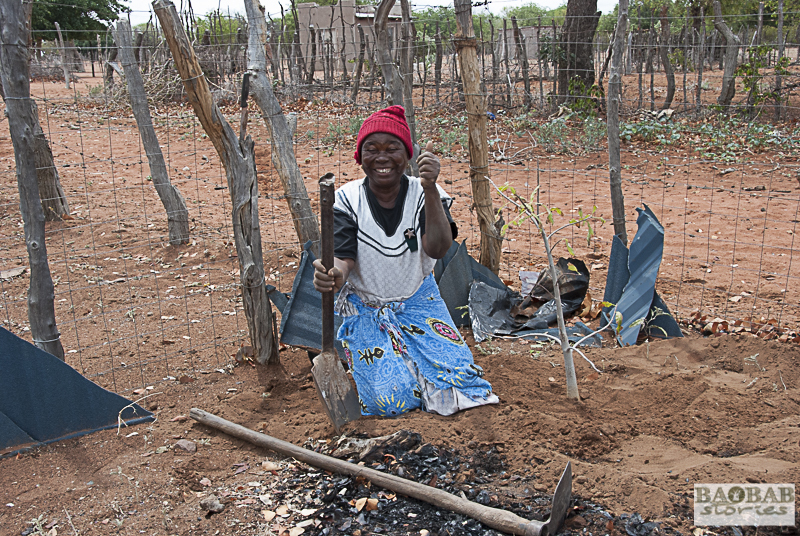 Today is a special day as we visit Martha Kwerana at her house in Zwigodini village in the Limpopo Province of South Africa. We were here at the very same spot three years ago but everything looks different today as Martha has managed to build a new house (read more later). 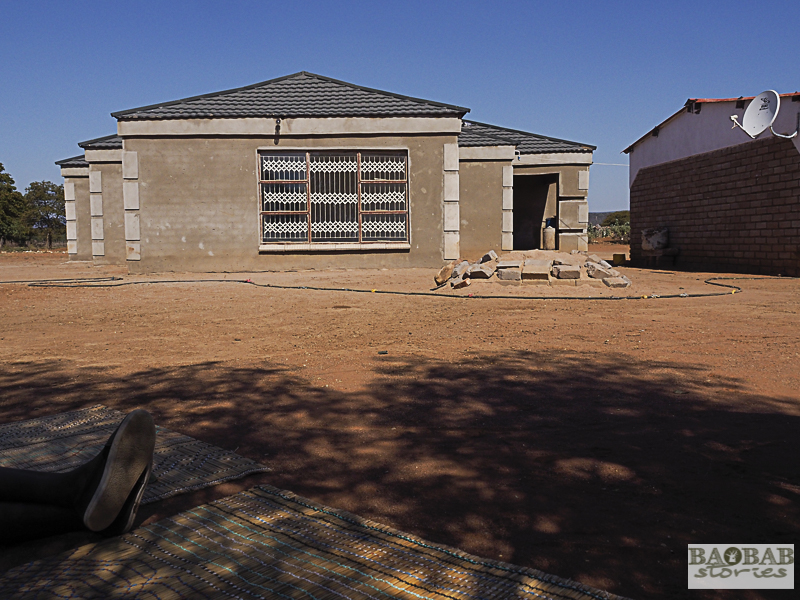 Martha is a Baobab Guardian and the last time we came here was in an effort to plant a little baobab together with her. Being a baobab guardian means that she grows a little baobab from seeds and then plants it in the garden of her homestead. 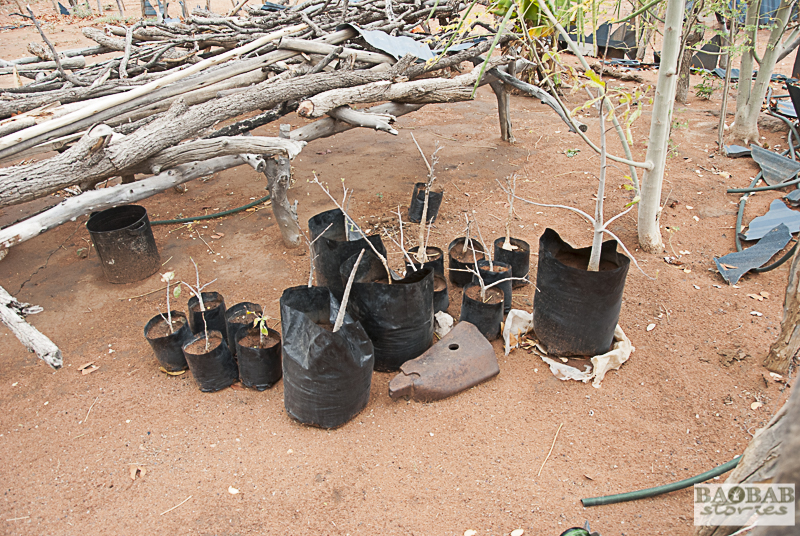 Baobab Saplings waiting to be planted 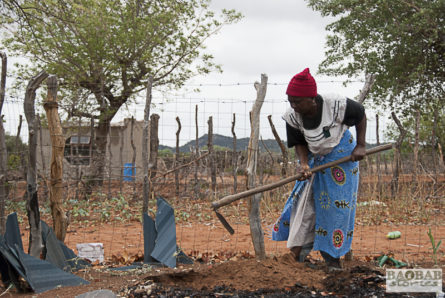 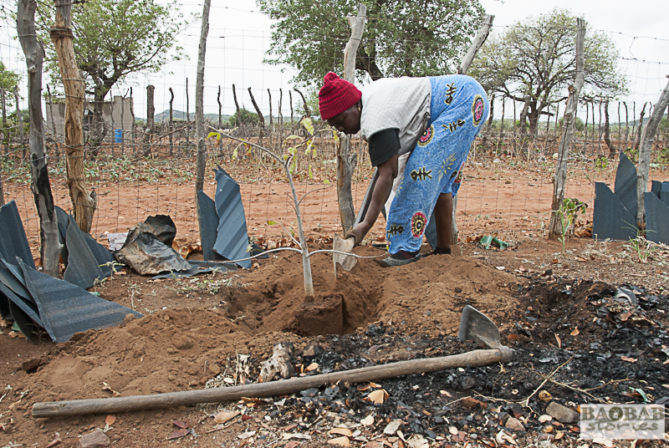 Her job for the next three years is to protect the little tree and to water it frequently. “I planted my little baobab in a corner of my compound near the fence and as far away from the house as possible. Baobabs grow big roots and I wanted to make sure that it does not damage the walls. My tree is about four years old and has grown considerably but not tall enough yet. Unfortunately some hungry cattle browsed on the leafy crown of it the other day and I was upset about that. But the tree will recover and grow new leaves. I am very fond of it”, says the proud owner of the little tree. 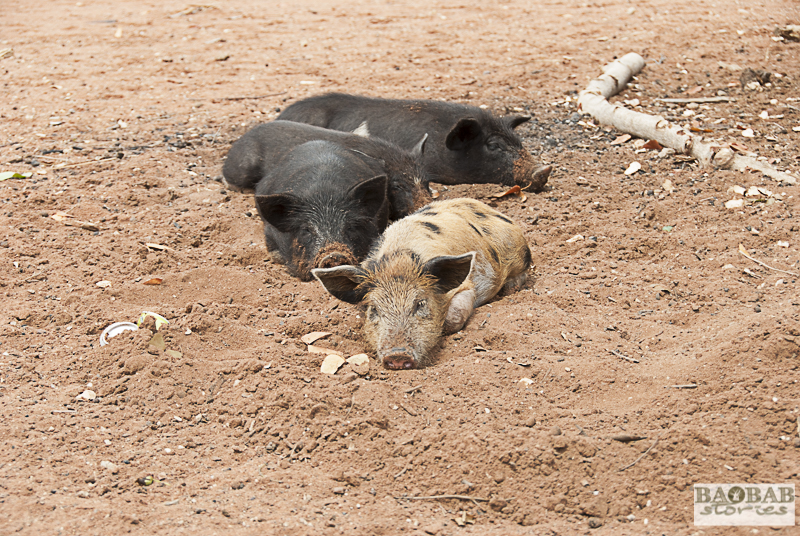 Pigs snoozing in the sun

Indeed, while we are in Zwigodini we see cattle, goats, chicken and pigs roaming around freely – always on the search for something edible. One of their preferred food items are the shoots and leaves of little baobabs. That is one of the reasons why we do not see many little baobabs here. For her effort with the little baobab Martha gets compensated. She receives money for planting it and for every centimetre the tree grows in a year. After a year at the onset of the rainy season in November Sarah comes back to measure the tree. 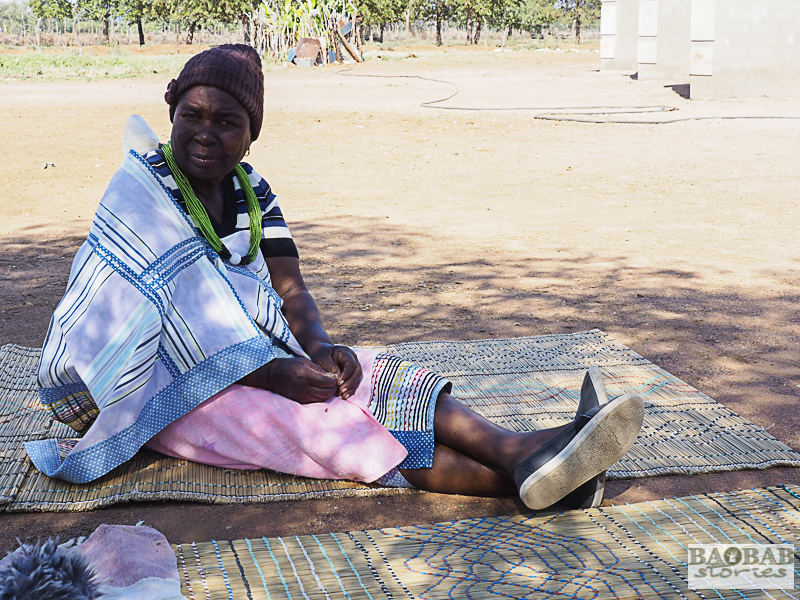 We sit under one of her wonderful fruit trees in the shade and Martha recollects how she came to Zwigodini. Originally she comes from Musina, a town in the north, close to the Zimbabwe border. The area is hot with poor soils and plenty of baobabs. She got married to her husband from Zwigodini. “I am old now and retired”, says Martha and continues “all my five children are grown up and have moved to other places. Meanwhile, I have 10 grandchildren.” 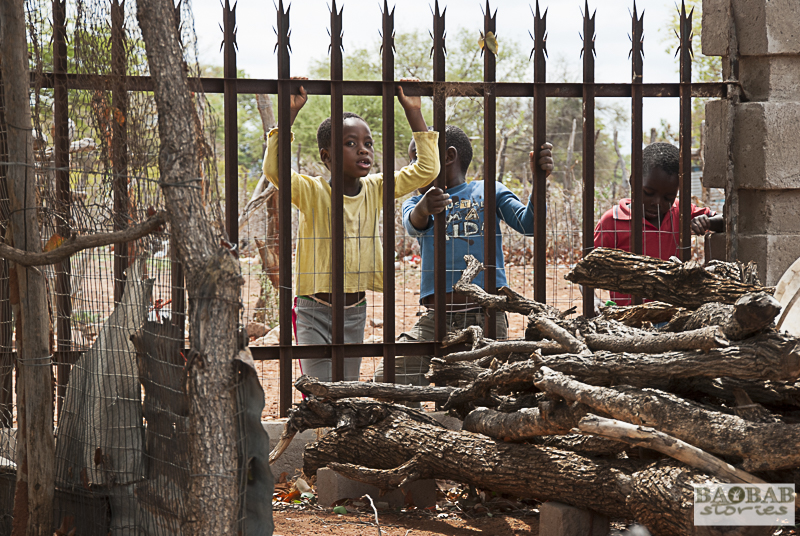 “One of my daughters died not long ago and her husband works in Johannesburg. I take care of one of their children at my house.” Martha is a widow. Her husband has died long ago. She receives 1.700 Rand government pension (approximately 125 USD) each month which is barely enough to make a living. “But I consider myself lucky because my other daughter went to a programme where she could study. She works for the government in our area as a social worker now. She has a regular income and could build a house for me which I am very proud of”, Martha explains. 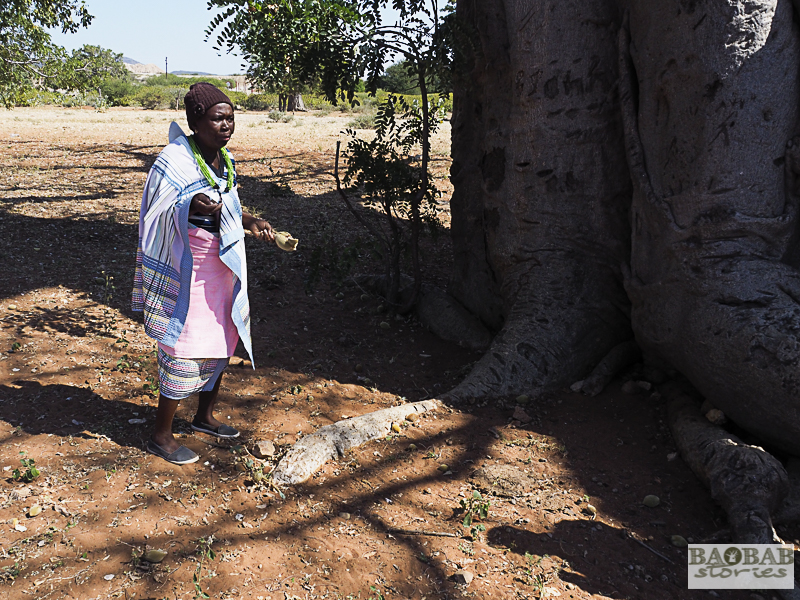 Baobab brings cash into the community

Life in the countryside is still not easy today. Buying groceries is expensive and can be quite an effort. Martha has to travel to Thohoyandou once a month to fill up her stock. In order to do so she has to travel approximately 200 km. Since there is no public transport she has to take a taxi for the trip. To her it is still worthwhile going because the items she needs are still cheaper than buying them locally. “During the cause of the month I buy bread, tomatoes and fresh eggs from the little store nearby. The income from baobab helps with that”, Martha says and continues “when I sell the fruit I receive cash which I can spend on local items so other women can benefit, too. The money travels from my pocket to the neighbour and she can buy things she needs and so on. Many people benefit from baobab in our local economy which is good. Usually when we want to get cash we need to travel 60 km to reach the next bank or ATM.” 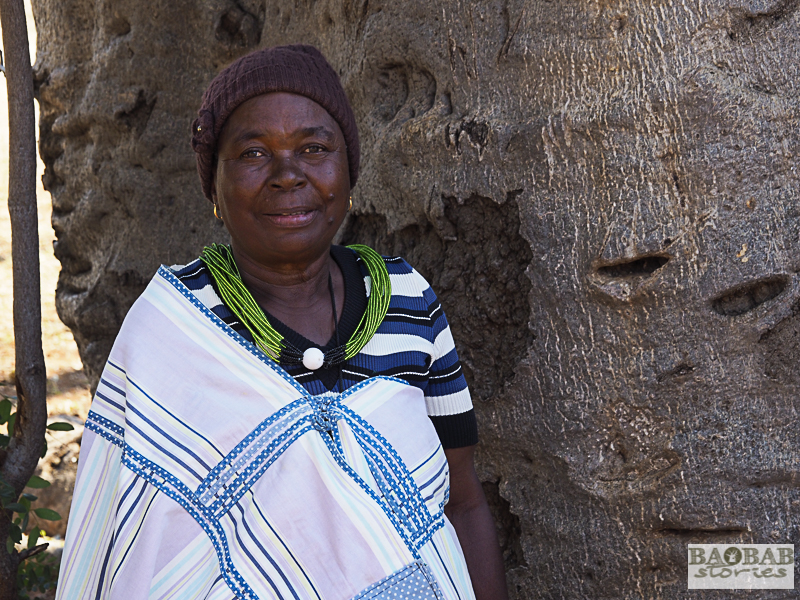 The economic situation has improved

The Baobab Guardian is happy with her life and puts it like that “looking back I must say that my life has improved a lot economically. When I started to collect and sell baobab fruit I was in need of that income. I did not get a child grant at that time and there are not many opportunities to earn money here. Without it I do not know how I would have been able to make a living. Although I get a pension now the money I earn by harvesting baobab is still very precious to me. I support the children with their school uniforms and give them some extra money to buy food at the school. 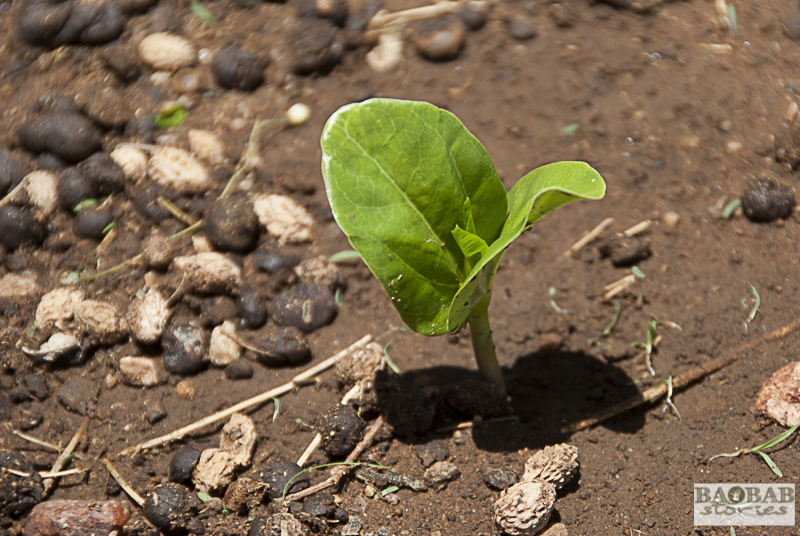 Little Baobab, germinated from seed in the wild

The Baobab has more advantages

Apart from the money that flows in her direction from baobab she appreciates the tree for the other benefits it provides. “I love to use the fruit powder”, she says, “I make a porridge with it. Sometimes I mix the powder with maize meal and cook pap”. That is the traditional staple food with Venda people and in the southern African region generally. It is similar to polenta and the baobab fruit powder adds a nice flavour to it. Sometimes she stirs the powder into her drinking water which makes a lovely drink on hot summer days. The young and tender leaves from the baobab make a good spinach – when they are cooked they make a nice spinach. 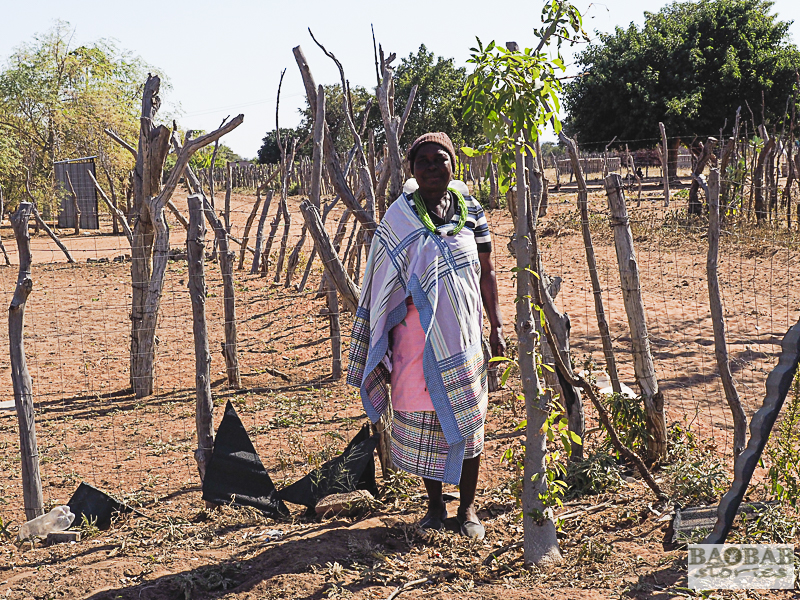 As we do not want to take up more of Martha’s time and our conversation is nearly at its end we walk up to the baobab that she successfully takes care of. It has grown considerably and we are happy that it is still there. Martha has taken good care of it. We can see that she is very proud of it. 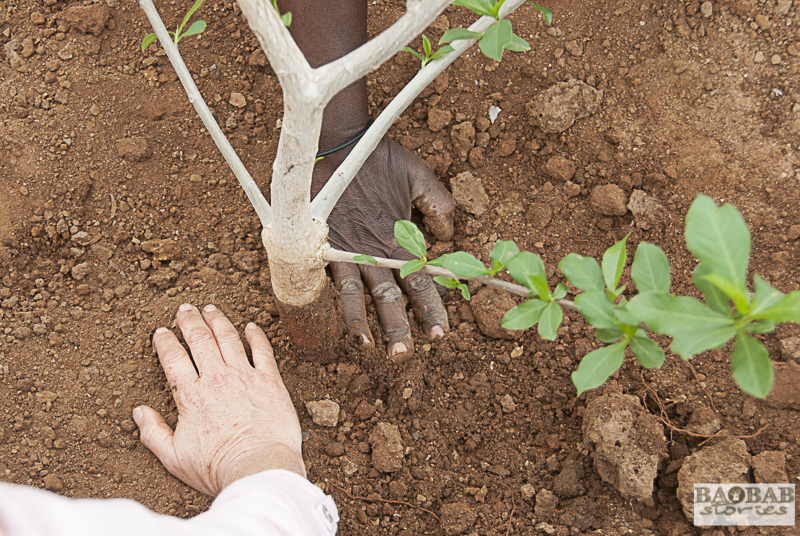