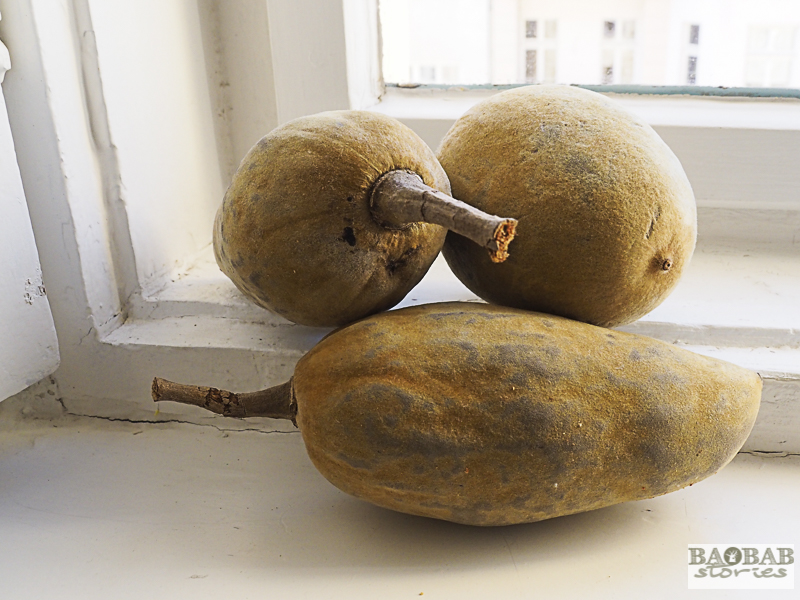 The fruits of the baobab or Baobab are known for their nutritious and healthy fruit powder. The population in their countries of origin uses the fruits for medicinal purposes and as a valuable component of their diet. However, the fruits are as versatile as the tree. They are useful in the household or as an instrument. The ashes of burnt shells serve as an ingredient in soap making. 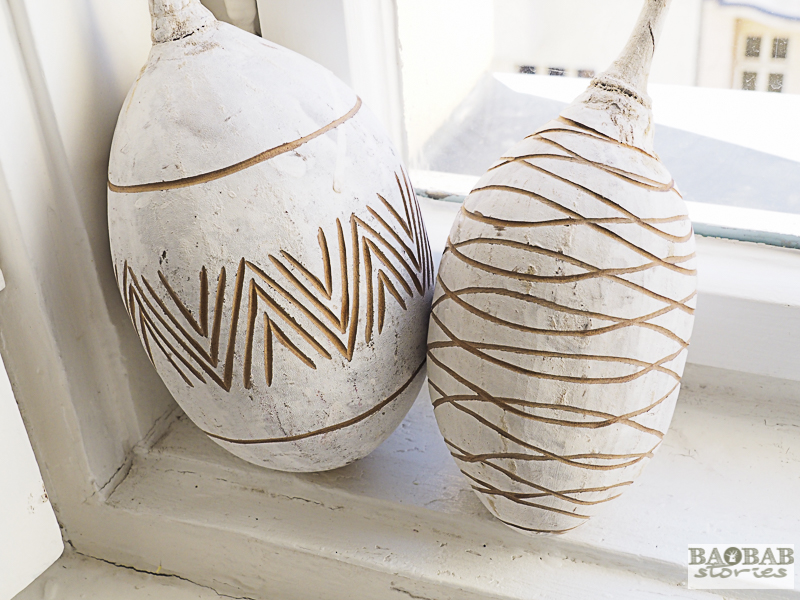 Whole fruits produce a rattling sound and make excellent musical instruments. When fishing one can use them as floaters for the fishing rods: they are light and swim at the surface. Recently, the Nanu-Nana gift ideas chain in Europe has discovered the fruits for their assortment. The baobab deco is painted white and carries incised patterns. The double positive effect if you buy them: first you get a nice decoration for your home and once you are tired of looking at it you can harvest the seeds hidden inside and start growing your own little baobab. 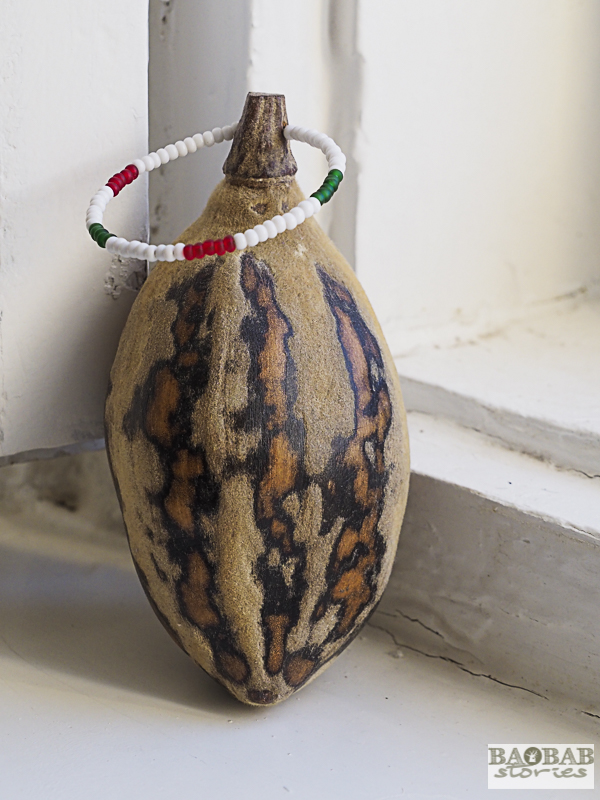 I have often seen baobab deco coming to the European markets. Aborigines in Australia brought their decorative designs to the market years ago. In retail stores such as well-stocked museum shops one can find natural baobab fruits. A good source for baobab deco are local souvenir shops and local markets in their countries of origin. I have seen a particularly smart business idea developed in Tanzania: people cut a round hole into the fruit and hollow it out. The empty fruit shell is used as a bird house. I think the baobab deco is appealingly beautiful in any way it shows. 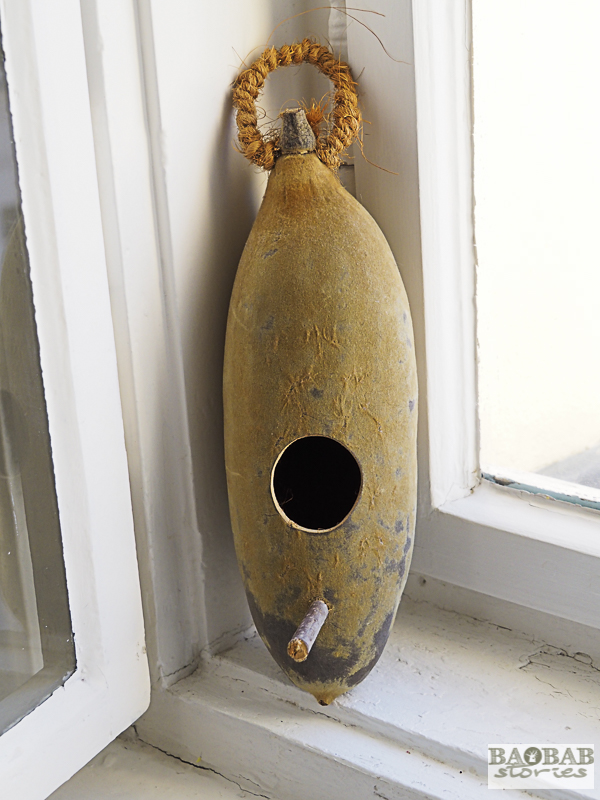 I am particularly interested in the variety of fruits and how they grow. In South Africa, for example, the rainy season usually starts in late October / early November. The flowers develop dangling down from the branches. As later the fruit, they hang on long peduncles off the branches. At first, the fruits shimmer light green or yellowish. As they mature, they change their color to gray-green, olive-green or brownish. 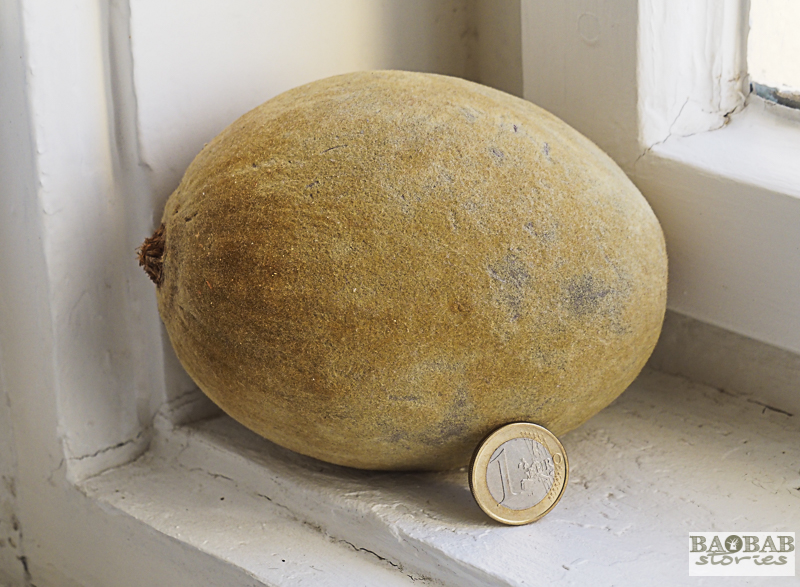 I love the feel of the baobab fruit in my hands: The outer layer of the fruit is adorned with yellow-brown hairs, which gives them a velvety feel on the touch. The pericarp is about five millimeters thick. This makes the shell hard and a bit difficult to crack. You can open the fruits with a saw. The local population chops up the fruits with machetes or stones. On Zanzibar, the shell is said to be up to 10 millimeters thick. 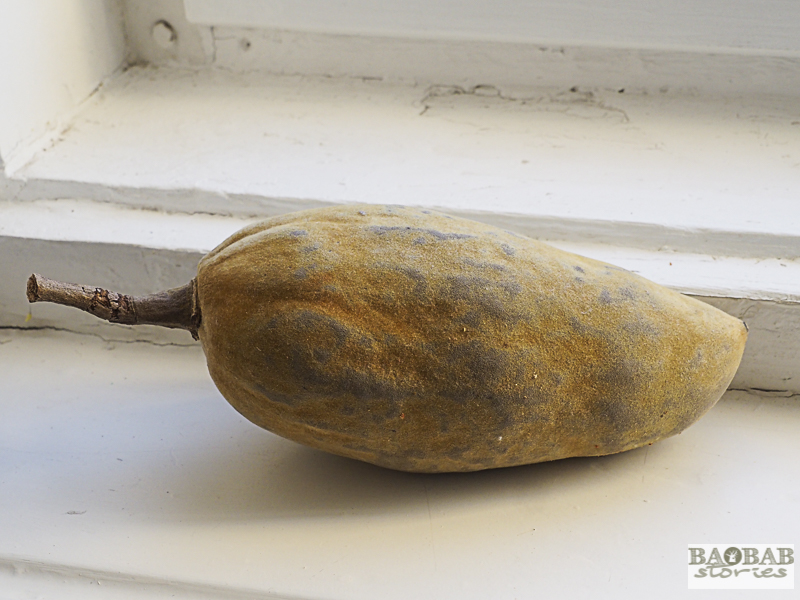 Depending on the region, the shape of the fruit can vary widely from roundish to oblong-cylindrical. The largest fruits reach a length of up to 54 centimeters and are about 20 centimeters wide. The smallest fruits I have seen were roundish, barely two centimeters long and about one and a half centimeters thick. As a baobab ecologist explained to me, this may be due to insufficient fertilization. Baobabs bear their first fruits between the age of 15 and 25 years. Adult trees can produce more than 250 fruits in one season. 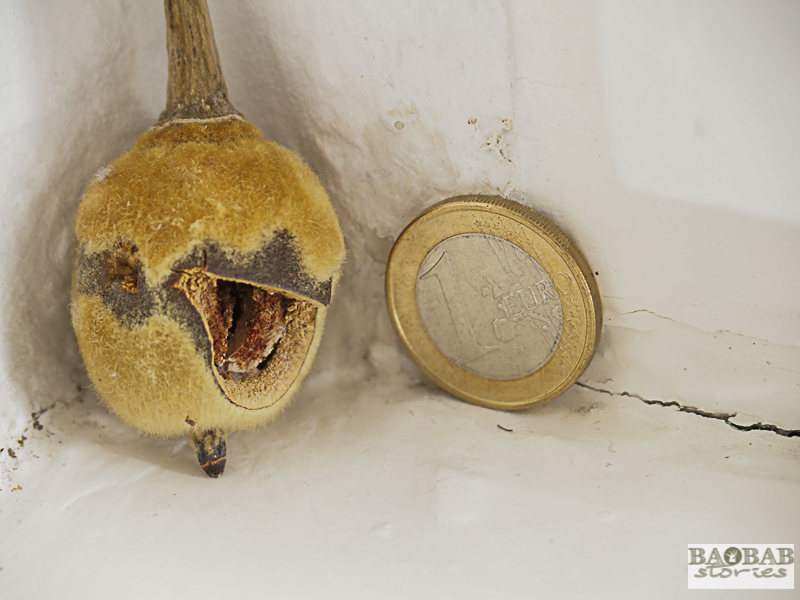